This ordinance mandates minimum blends of biodiesel and ethanol in petroleum-based fuels sold in Portland and requires city-owned vehicles to maximize use of renewable fuels. 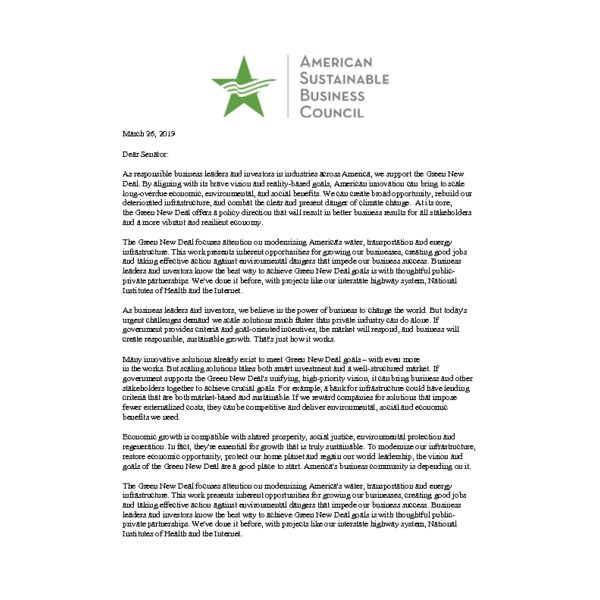 An ordinance relating to Seattle\'s Complete Streets policy, stating guiding principles and practices so that transportation improvements are planned, designed and constructed to encourage walking, bicycling and transit use while promoting safe operations for all users.

Racial Equity: Getting to Results 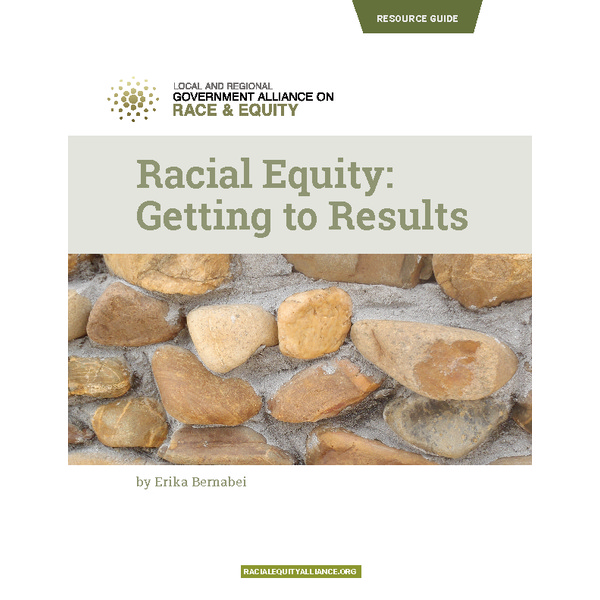 Currently across the country, regardless of region, racial inequities exist across every indicator for success - including health, criminal justice, education, jobs, housing, and beyond. We know these inequities are incongruent with our aspirations. The Government Alliance on Race and Equity (GARE), a joint project of the Haas Institute for a Fair and Inclusive Society at the University of California, Berkeley and Center for Social Inclusion, recognizes that we can and must do better. We know that government has a key role in advancing racial equity, and therefore are modeling at the local level how it is truly possible for government to advance racial equity and to develop into an inclusive and effective democracy. 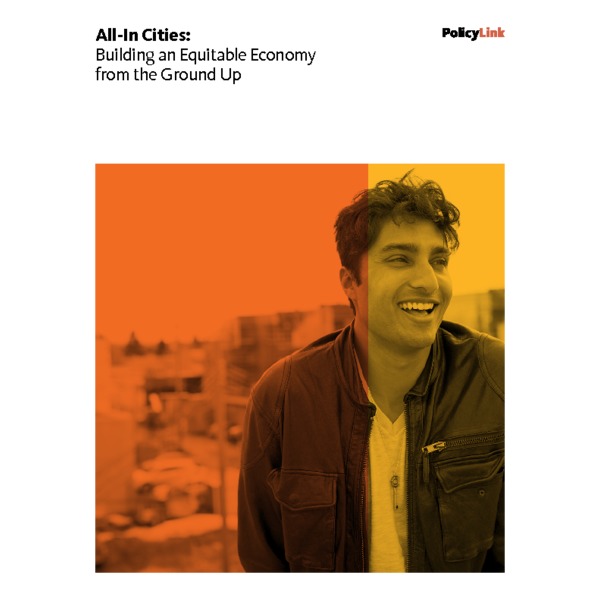 The first quarter of the 21st century may well be remembered as the period in which U.S. cities regained their footing, showed their resilience, and became drivers of economic innovation. All-In Cities, a new initiative launched with this report, offers tools and strategies to accelerate this process and ensure city success is sustained by deliberately baking in pathways for all to contribute and prosper, a crucial ingredient for \"comeback cities.\" All-In Cities marks a continued effort to shift the narrative on racial inequality in America. We believe that dismantling persistent racial barriers and investing in the people of color who are the emerging majority is both the right thing to do and critical to securing America\'s economic future. Cities are ground zero for demonstrating this interconnectedness. Success in cities and the nation depends on the ability of people of color to be the leaders, innovators, workers, entrepreneurs, and creative problem solvers who can produce widespread prosperity for generations. This report, along with the All-In Cities initiative, focuses on the particular role of cities in moving toward an all-in nation. Large and small, urban and suburban, cities are where most people of color live and where the next economy is taking shape. They are where movements countering inequality and police brutality are capturing the public\'s imagination and propelling forward new policy solutions. And cities are where working-class communities of color are most able to be equal partners in creating innovative solutions. 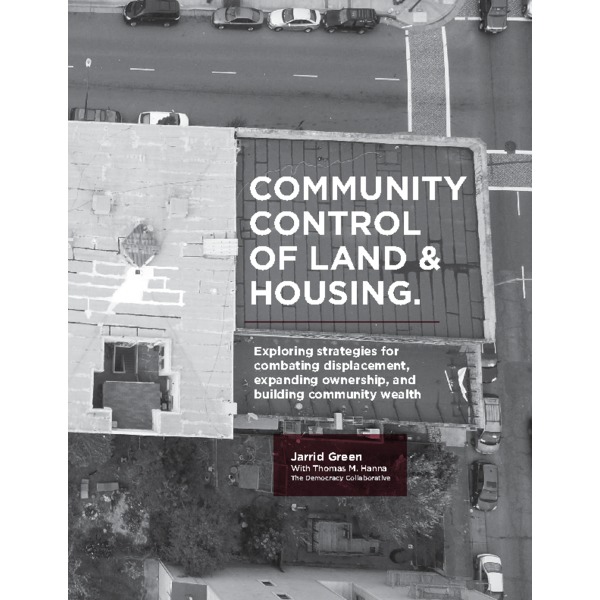 This report is based on dozens of interviews with practitioners, academics, and community members, as well as a review of various reports, studies, and surveys. It shares the resulting findings through key research insights, a review of best practices, and relevant examples. It seeks to broaden awareness, discourse, and adoption of community control of land and housing strategies among various stakeholders who have a genuine desire to see stable, healthy, equitable, and sustainable local communities flourish. These stakeholders include community activists, municipal officials, economic development professionals, community development practitioners, anchor institution leaders, and social investors. 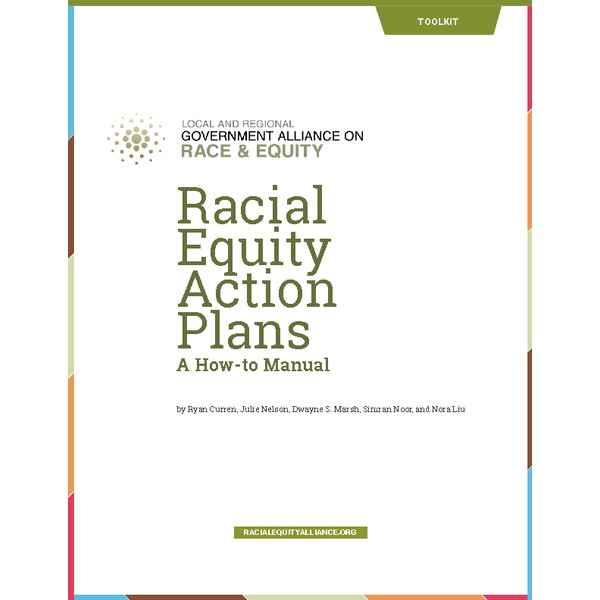 While local governments may consider themselves fair and just, people of color fare worse than their white counterparts in every area: housing, employment, education, justice, and health. Current day disparities are just as bad and sometimes worse than they were before the Civil Rights era. Since then, most governments have not made significant changes in outcomes for employees or residents of color, even with years of effort. Because local governments have a unique responsibility to all residents, these racial inequities can and must be addressed. The public sector must be for the public good; current racial inequities are destructive. We must go beyond individual, intentional discrimination or acts of bigotry, and examine the systems in which we all live. We must investigate - honestly - how our longstanding systems, policies, and practices, unintentionally or not, have created and continue to maintain racial inequity, and we must change them.

Transit-Oriented Development and Joint Development in the United States: A Literature Review 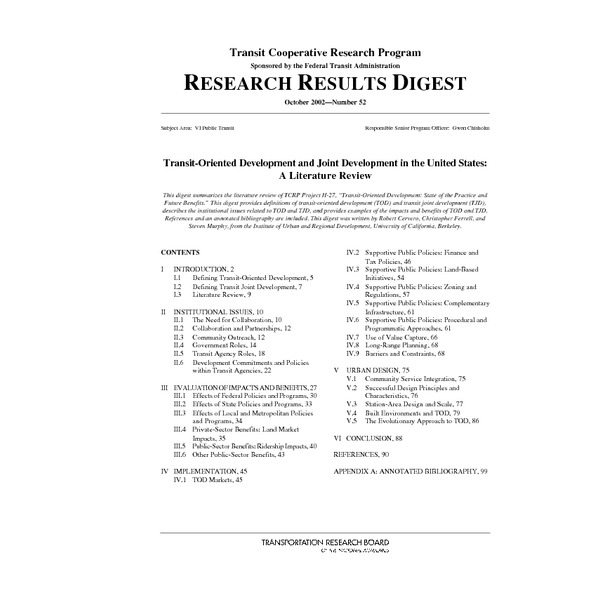 This digest summarizes the literature review of TCRP Project H-27, "Transit-Oriented Development: State of the Practice and Future Benefits." This digest provides definitions of transit-oriented development (TOD) and transit joint development (TJD), describes the institutional issues related to TOD and TJD, and provides examples of the impacts and benefits of TOD and TJD. References and an annotated bibliography are included. This digest was written by Robert Cervero, Christopher Ferrell, and Steven Murphy, from the Institute of Urban and Regional Development, University of California, Berkeley. 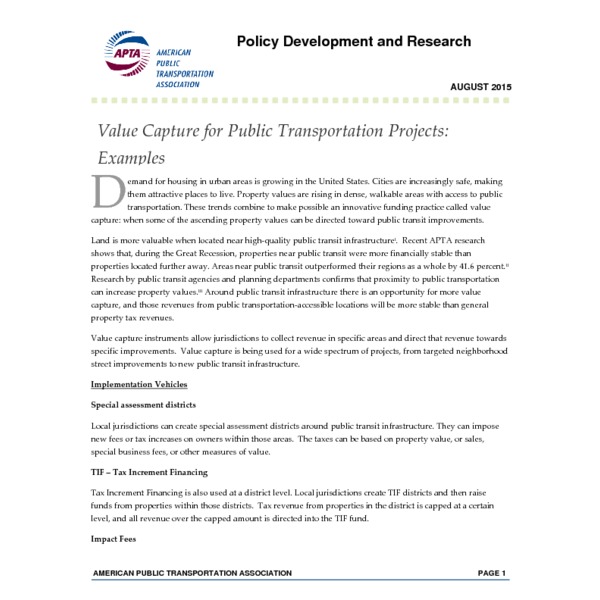 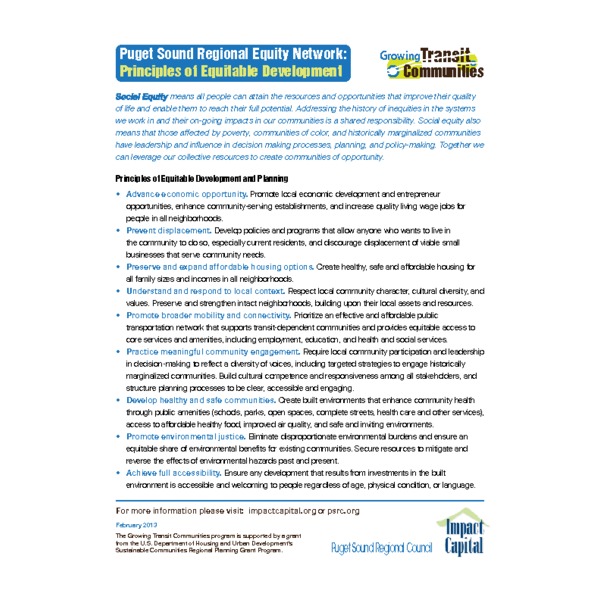