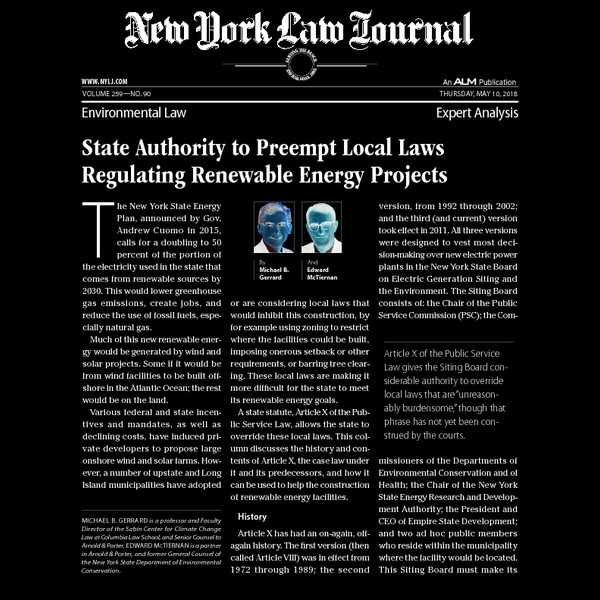 The New York State Energy Plan, announced by Gov. Andrew Cuomo in 2015, calls for a doubling to 50 percent of the portion of the electricity used in the state that comes from renewable sources by 2030. This would lower greenhouse gas emissions, create jobs, and reduce the use of fossil fuels, especially natural gas. Much of this new renewable energy would be generated by wind and solar projects. Some of it would be from wind facilities to be built offshore in the Atlantic Ocean; the rest would be on the land. Various federal and state incentives and mandates, as well as declining costs, have induced private developers to propose large onshore wind and solar farms. However, a number of upstate and Long Island municipalities have adopted or are considering local laws that would inhibit this construction and thus make it more difficult for the state to meet its renewable energy goals. As state statute, Article X of the Public Service Law, allows the state to override these local laws. This column discusses the history and contents of Article X, the case law under it and its predecessors, and how it can be used to help the construction of renewable energy facilities. 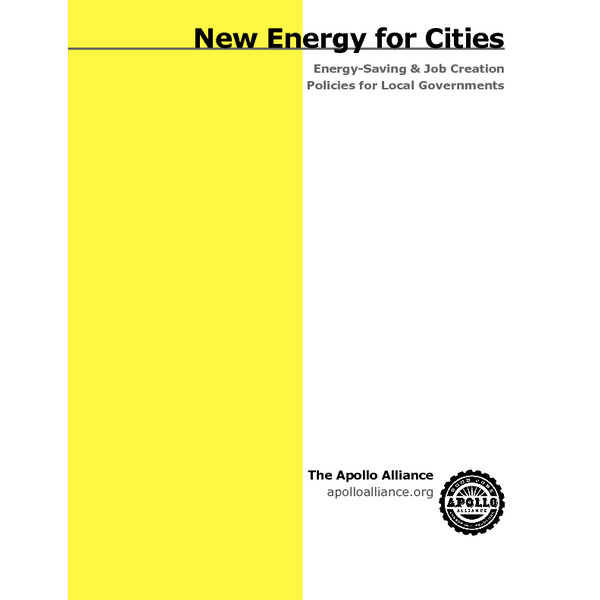 Cities and counties from across the nation are pioneering new clean energy solutions that could help end our nation’s oil addiction and create good jobs, according to the most recent report from the Apollo Alliance. Four Ohio municipalities: Bowling Green, Canton, Cincinnati, Cleveland, are highlighted in the national report. Policy Matters Ohio, Apollo’s Ohio partner, is thrilled that New Energy for Cities highlights dozens of representative municipal programs that promote renewable power, reduce oil consumption, make buildings more efficient and promote smart growth. The mission of Ohio Apollo is to work with Ohio’s cities to adopt these policies and create jobs through environmentally sound and energy efficient solutions. 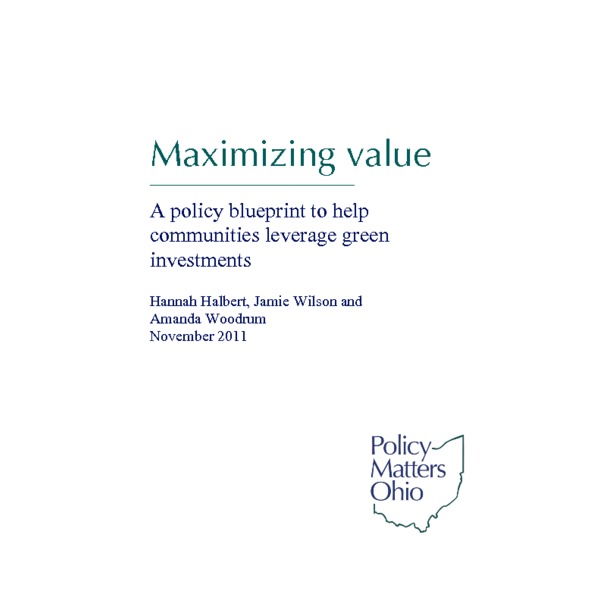 Ohio communities need a better approach, one that fosters economic growth while also protecting the environment and supporting local businesses and workers. This is why the City of Oberlin, in partnership with Oberlin College and the city’s municipal utility have launched “The Oberlin Project” to make Oberlin the greenest little city in the U.S., grow the local economy in the process, and become a national model for sustainable economic development. This report is a policy blueprint to help Oberlin, and all Ohio communities, drive demand for clean energy while leveraging green investments to secure maximum value to the community. The four key components of this comprehensive strategy are designed to balance the three E’s of sustainable economic development—environment, economy, and equity. 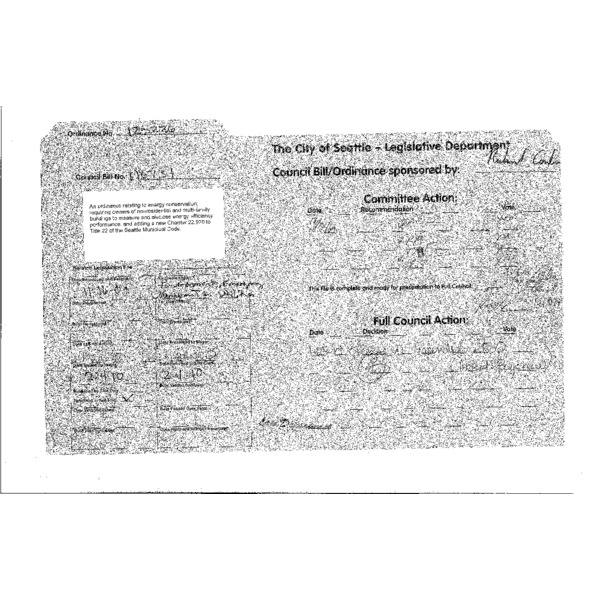 An ordinance relating to energy conservation; requiring owners of nonresidential and multi-family buildings to measure and disclose energy efficiency performance, and adding a new Chapter 22.920 to Title 22 of the Seattle Municipal Code. 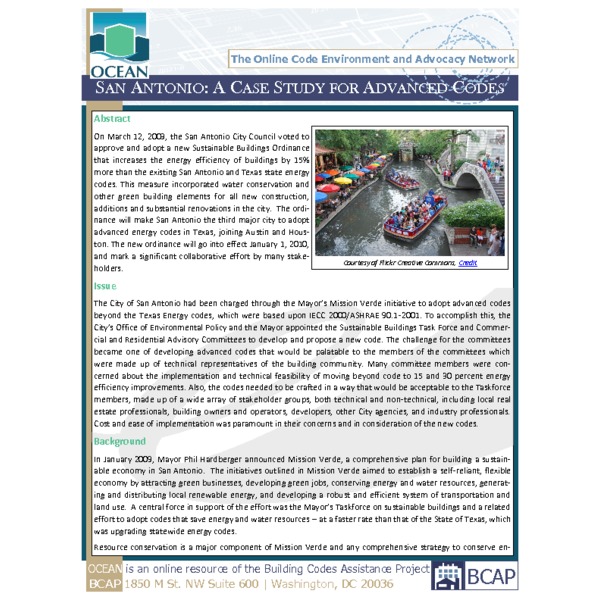 OCEAN is an online resources of the Building Codes Assistance Project. Here they provide a case study of the work happening in San Antonio. On March 12, 2009, the San Antonio City Council voted to approve and adopt a new Sustainable Buildings Ordinance that increases the energy efficiency of buildings by 15% more than the existing San Antonio and Texas state energy codes. This measure incorporated water conservation and other green building elements for all new construction, additions and substantial renovations in the city. The ordinance will make San Antonio the third major city to adopt advanced energy codes in Texas, joining Austin and Houston. The new ordinance will go into effect January 1, 2010, and mark a significant collaborative effort by many stakeholders. 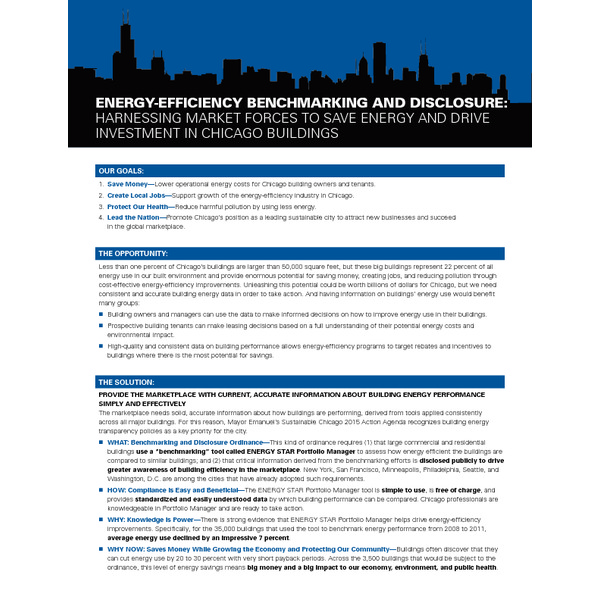 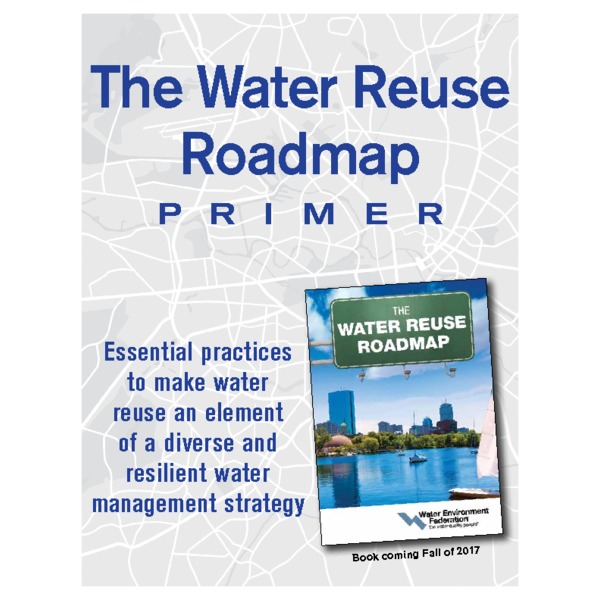 The goal of the Reuse Roadmap is to develop a high-level approach to help guide utilities and industry decision-makers in issues to address when considering water reuse Like the Energy and Nutrients roadmaps, the Water Reuse roadmap is brief and high level to be accessible to all types of stakeholders, including public officials, utility managers, operators, engineers, and regulators The roadmap will not "reinvent the wheel," with all of the great technical resources available. Rather, the focus will be to help decision-makers to quickly understand the strategic issues inherent in a water reuse effort 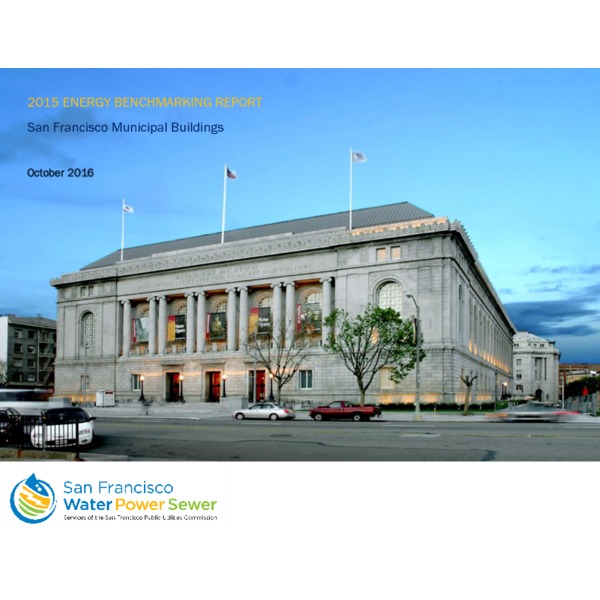 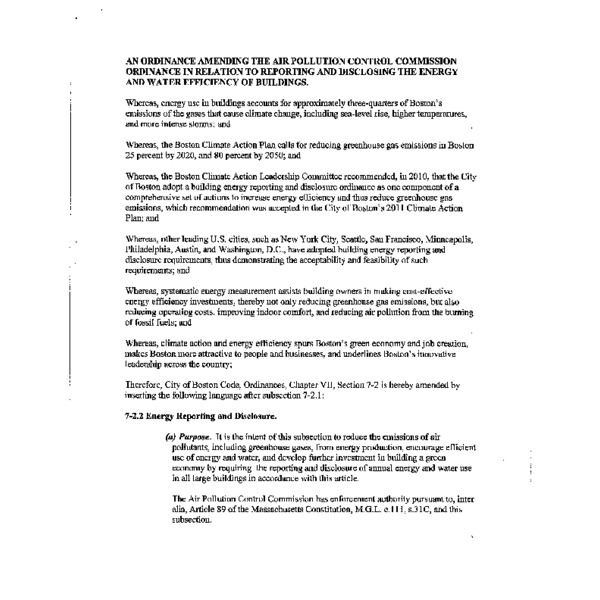 An ordinance amending the air pollution control commission ordinance in relation to reporting and disclosing the energy and water efficiency of buildings. 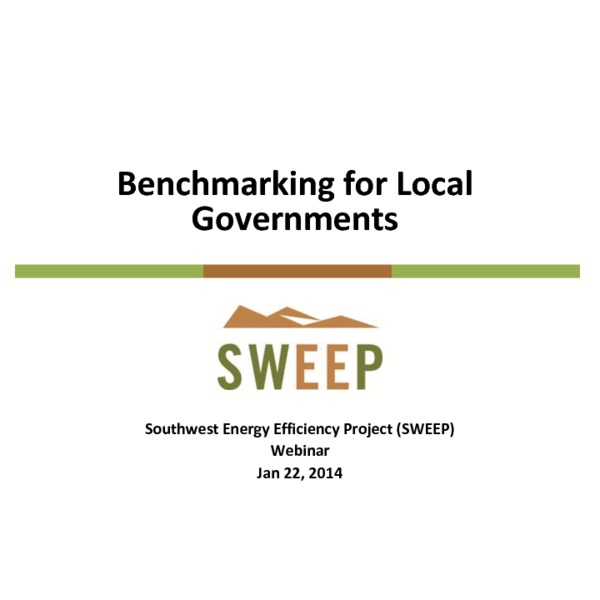