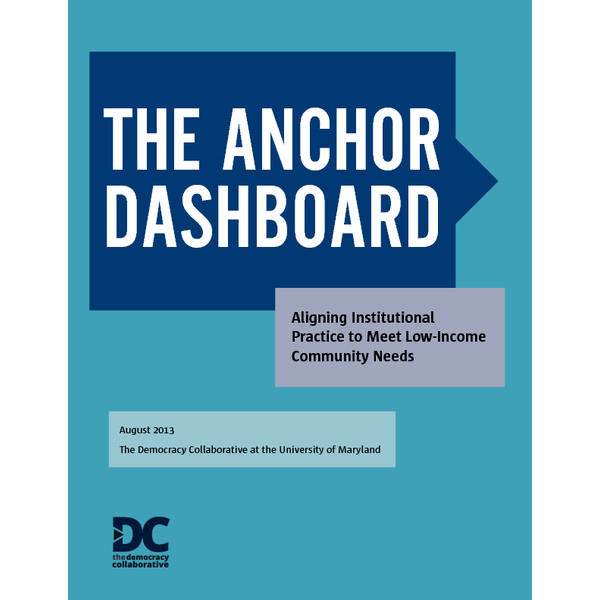 Anchor institutions are place-based entities such as universities and hospitals that are tied to their surroundings by mission, invested capital, or relationships to customers, employees, and vendors. These local human and economic relationships link institution well-being to that of the community in which it is anchored. Increasingly, anchor institutions across the nation are realizing this interdependence and are expanding their public or nonprofit mission to incorporate what we call an "anchor mission." In other words, they are consciously applying their long-term, place-based economic power, in combination with their human and intellectual resources, to better the long-term welfare of the communities in which they reside. 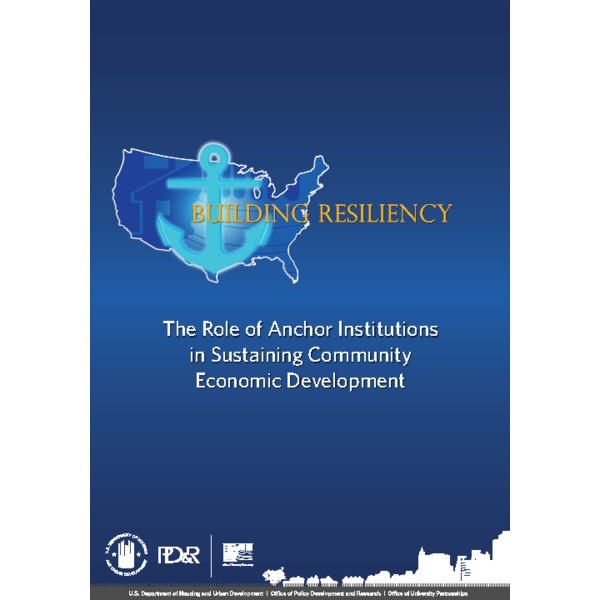 Chester, Pennsylvania, a small, formerly industrial city located on the Delaware River, not far from Philadelphia, exemplifies the problems and possibilities faced by older manufacturing cities across the United States, especially in the Northeast and Midwest. Chester's problems of poverty, stagnation, and unemployment stem from the late 20th-century decline of an industrial economy in the United States - which in Chester was primarily centered on automobile manufacturing and shipbuilding - and the flight of the more affluent residents to the suburbs. The remaining residents face high poverty, high unemployment, a crumbling infrastructure, lack of services and businesses, and underperforming schools. There is hope, however. Although the Federal Reserve Bank classifies Chester as a "struggling city," Chester also embodies the possibilities in the concept of resilience defined as "the individual and collective capacity to respond to adversity and change." The project of turning Chester around is a work in progress, but Chester is also a community that has taken intentional action "to enhance the personal and collective capacity of its citizens and institutions to respond to and influence the course of social and economic change." In fact, Chester, and one of its key partners in community revitalization, Widener University, can serve as a case study of what building resilience can look like in the face of daunting challenges. 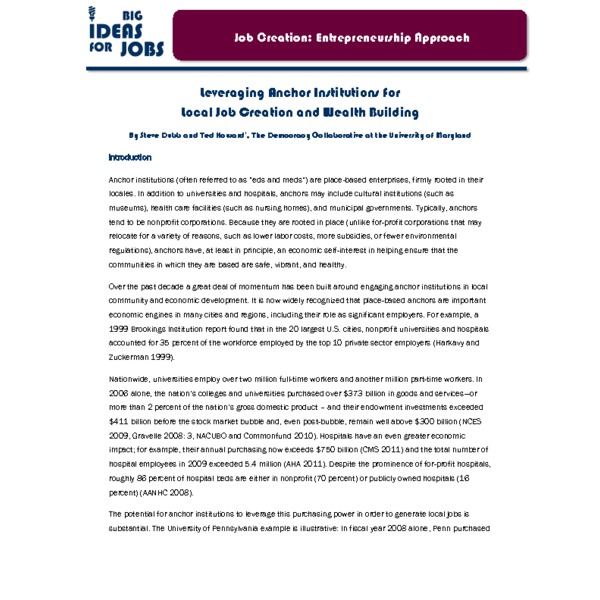 Anchor institutions (often referred to as \"eds and meds\") are place-based enterprises, firmly rooted in their locales. In addition to universities and hospitals, anchors may include cultural institutions (such as museums), health care facilities (such as nursing homes), and municipal governments. Typically, anchors tend to be nonprofit corporations. Because they are rooted in place (unlike for-profit corporations that may relocate for a variety of reasons, such as lower labor costs, more subsidies, or fewer environmental regulations), anchors have, at least in principle, an economic self-interest in helping ensure that the communities in which they are based are safe, vibrant, and healthy. 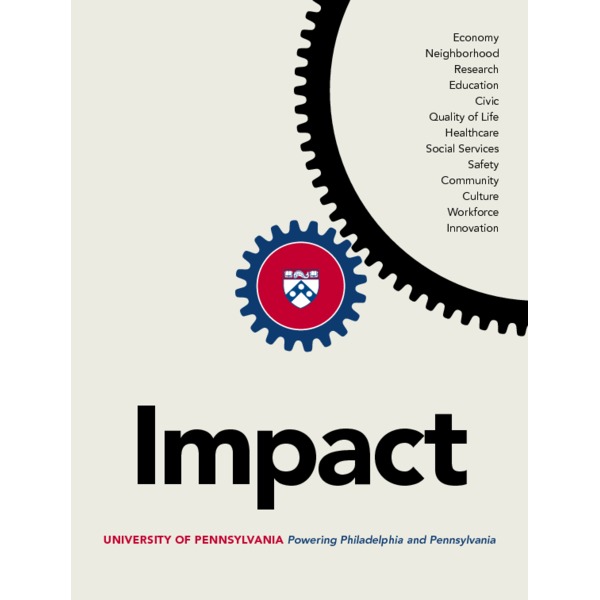 A report examining the University of Pennsylvania's economic imapct on Philadelphia and Pennsylvania. 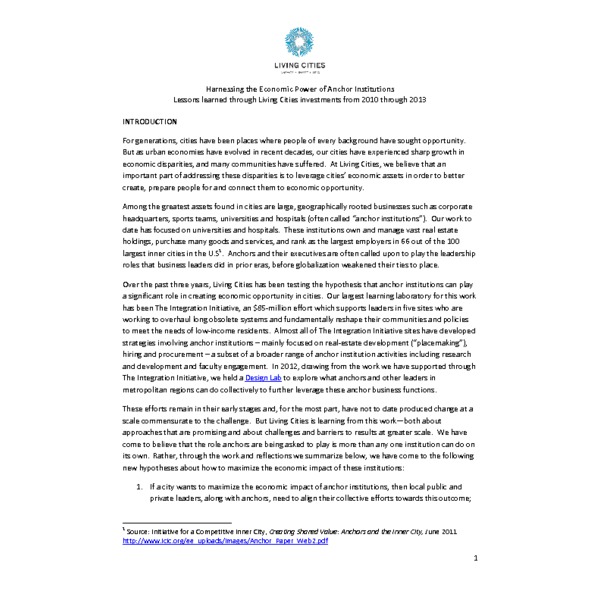 For generations, cities have been places where people of every background have sought opportunity. But as urban economies have evolved in recent decades, our cities have experienced sharp growth in economic disparities, and many communities have suffered. Addressing these disparities requires leveraging cities' economic assets in order to better create, prepare people for and connect them to economic opportunity. 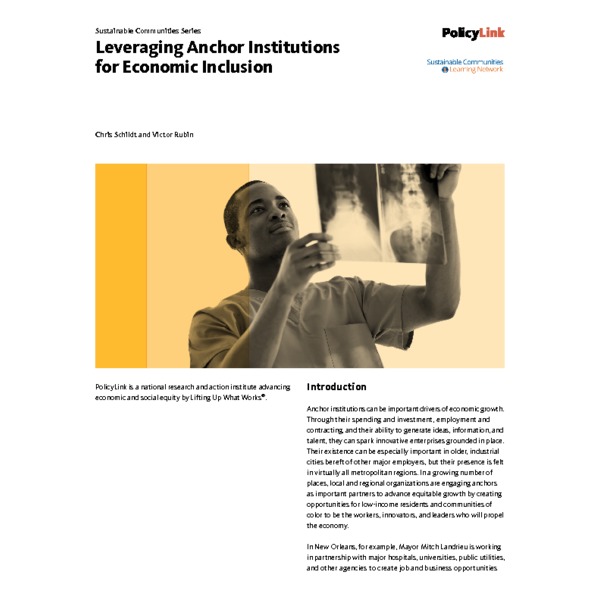 Anchor institutions can be important drivers of economic growth. Through their spending and investment, employment and contracting, and their ability to generate ideas, information, and talent, they can spark innovative enterprises grounded in place. Their existence can be especially important in older, industrial cities bereft of other major employers, but their presence is felt in virtually all metropolitan regions. In a growing number of places, local and regional organizations are engaging anchors as important partners to advance equitable growth by creating opportunities for low-income residents and communities of color to be the workers, innovators, and leaders who will propel the economy.

Striking a (Local) Grand Bargain: How Cities and Anchor Institutions can Work Together to Drive Growth and Prosperity 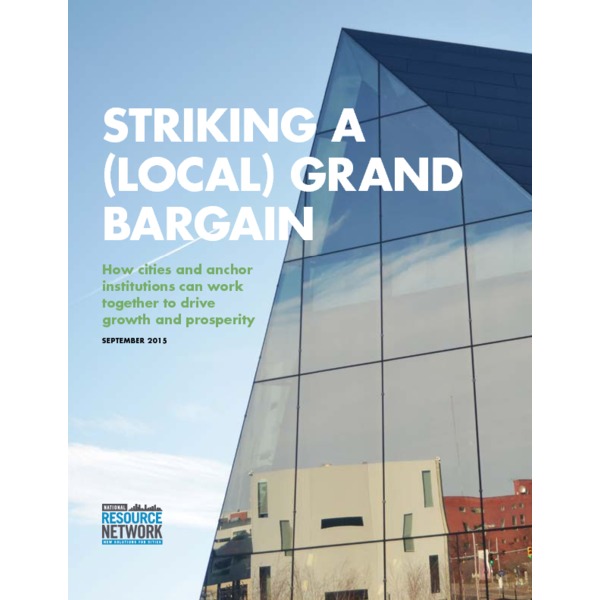 Cities need partners. At a time when local governments are confronting challenges on multiple fronts ranging from rising inequality to fast-moving global economic tides and reduced state and federal support, collaboration has never been so important. Historically, cities have proven able to respond to local challenges through partnerships. A recent Boston University survey of 70 mayors showed that chief elected officials have an uncanny ability to cooperate with most anyone. In the survey, most mayors ranked the business community as their most reliable collaborator, with the vast majority stating that they have a highly cooperative relationship with local employers. This is no surprise as the private sector has long been the default partner for mayors and city managers. But with capital flight rampant, there are few traditional civic-minded corporate headquarters left. In 2015, it is \"anchor institutions\" - universities, medical centers and hospitals - that are the obvious partner for city leadership.

A New Anchor Mission for a New Century 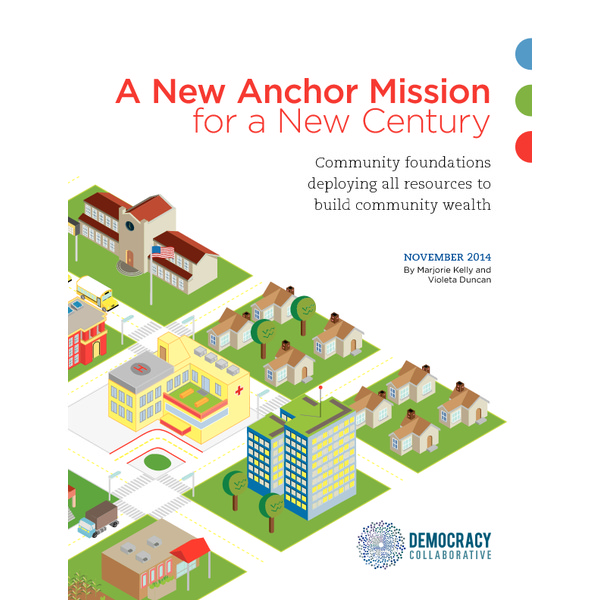 As the community foundation field reaches the century mark and faces growing pressure on its business model, many communities at the same time are struggling with economic distress. To meet these converging challenges, an innovative group of community foundations are beginning to deepen and shift how they work - adopting an anchor mission that seeks to fully deploy all resources to build community wealth. They are calling on all assets at their disposal - financial, human, intellectual, and political - in service of their communities' economic well-being. Moving into territory relatively uncharted for community foundations, they are taking up impact investing and economic development - some in advanced ways, others with small steps. This report offers an overview of how 30 representative community foundations, large and small, urban and rural, are working toward adopting this new anchor mission.

The Foundational Role of Universities as Anchor Institutions in Urban Development 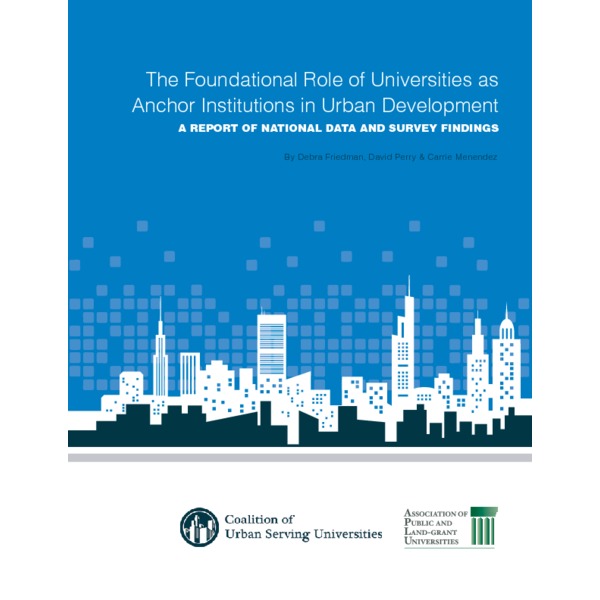 In the past quarter century, universities have committed themselves to greater engagement in their communities. They are increasingly seen as "anchor" institutions - whose physical presence is integral to the social, cultural, and economic wellbeing of the community. Urban-based universities in particular have recognized the many challenges facing their - and the nation's - cities. Understanding that their fortunes are tied in part to those of their neighbors and physical surroundings, many have expanded their efforts to engage new partners and address pressing community issues. In the process, they are broadening the education of students, improving neighborhoods and cities, helping strengthen other anchor institutions, and informing and advancing the larger society. 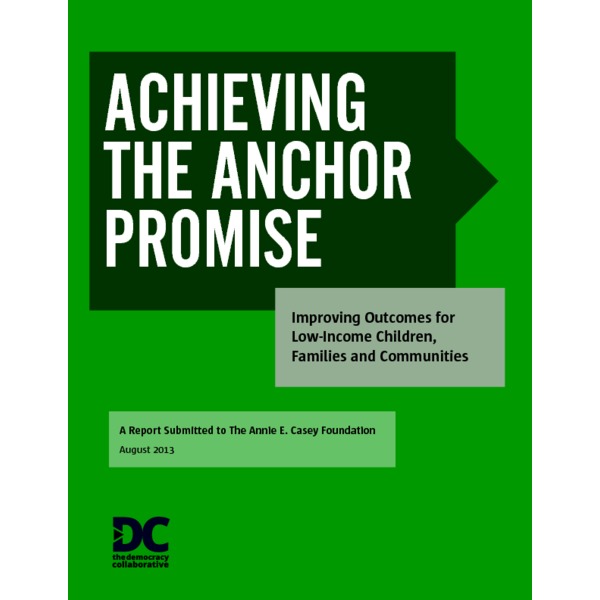 It is widely acknowledged that hospitals and universities are anchor institutions - that is, place-based institutions that are tied to their location by reason of mission, invested capital, or relationships to customers or employees and hence have a vested interest in improving the welfare of their surrounding communities. A question that is increasingly arising, however, is to what extent are universities and hospitals conducting their work in ways that explicitly improve the lives of low-income children, families and communities that are often proximate to the campuses of these institutions in major urban areas.