Democracy means self-rule with equal say, and candidates in democratic elections for public office should compete for the support of all voters, considered equally. But the US elections have been corrupted by big money, and candidates must first win a “wealth primary” –either by having their own deep pockets or attracting the support of those who have them – before voters get their say. Only a tiny share of the population have the money to bankroll elections, effectively making America an oligarchy. Recent studies have shown that while wealthy elites and business interests shape government policy, average citizens and majoritarian social movements have little to no influence. Americans across the political spectrum are concerned about the influence of money in politics. Most Americans—88 percent overall, including 66 percent of Republicans and 85 percent of Democrats—want to overturn Citizens United v. FEC (2010), the Supreme Court decision abolishing long-standing restrictions on political fundraising and spending.

Local governments should implement campaign finance reforms to strengthen democracy and improve local elections. These include public financing for local elections to ensure elected officials represent the interests of the many and not just the wealthy few, local-level campaign contribution limits to curb the effect of big money in politics, and campaign contribution disclosure laws to improve the transparency of the democratic process. While both major political parties are, at the national and state level, beholden to deep-pocket donors, we can take steps at the local level to fight for a real democracy.


The big money pouring into local politics has driven up the cost of local elections, preventing candidates who aren’t supported by moneyed interests from running effective campaigns. Municipalities can even the playing field and amplify the voice of everyday voters by providing public financing for municipal elections. These programs provide public funds to candidates for campaign expenses, in exchange for candidates adhering to certain restrictions, like minimizing their campaign expenditures or limiting the size of acceptable donations. One of the most effective forms of public financing is matching funds from small donors. Under this system, candidates receive “matching” public funds for every small dollar contribution they receive. The most effective matching programs amplify private small donor donations, by awarding multiples of the initial donation: for example, a 6-to-1 match grants candidates six public dollars for every private dollar contributed. Matching programs are used in Washington, D.C (5:1), Denver, CO (9:1) and Los Angeles, CA (6:1). In New York City, where the match rate is 8-to-1, 97% of the 39 women of color elected to the New York City Council raised funds through the city’s public financing program—resulting in NYC’s most diverse city council to date. Matching programs encourage candidates to appeal to small donors, and signal to small donors that their contributions matter.

Democracy voucher programs, pioneered in Seattle, WA, are another effective system of public financing. In Seattle, registered voters receive four $25 vouchers each election, which they can contribute to candidates running for city council or mayor. The democracy voucher program has increased the number of residents participating in the campaign finance system by facilitating donations from economically constrained individuals who otherwise could not contribute. Providing tax credits or rebates can also increase participation, by incentivizing taxpayers to make contributions knowing they will receive some of their money back.

Public financing systems can be paired with laws that limit campaign contributions to help ensure elected officials prioritize the needs of the public at large. To prevent moneyed interests from having a disproportionate impact over elections, cities like Washington, D.C., Albuquerque, NM, New York City, Chicago, IL, Sacramento, CA, and Milwaukee, WI limit the amount of money individuals can donate to municipal campaigns. Denver, CO has also banned direct contributions from businesses and unions, while Chicago, IL has banned contributions from lobbyists and persons doing business with the city. Lastly, Orange County, NY’s pay-to-play law prohibits businesses from making campaign contributions if they hold a contract with the county.

Ultimately, campaign finance reforms require transparency to ensure their effectiveness. Municipalities should enact disclosure ordinances which require candidates and political groups to reveal the source and amount of the contributions they receive. This can reduce the influence of “dark money” (funds from groups that do not disclose their donors, or politics). Philadelphia, PA’s Campaign Finance Law and Ventura County, CA’s Campaign Finance Reform Ordinance serve as model examples of disclosure requirements in action.

Unfortunately, some states use the legal strategy of preemption to restrict communities’ ability to ensure local elections reflect the preferences of local voters. Please see the ProGov21 Home Rule Roadmap for more information on preemption and tools that you can use to address it.

Unfortunately, we cannot truly reform money in politics without reforming the Supreme Court. Beginning with Buckley v. Valeo (1971), and continuing through Citizens United v. FEC (2010), our Supreme Court has held that political donations are protected speech under the First Amendment. Most recently, in Federal Election Commission v. Ted Cruz For Senate (2021), the court held that the purchase of “influence and access” embodies a “central feature” of democracy—a protection the court has not  extended to the vote in its recent voting rights cases. Unfortunately, the last three Supreme Court Justices were appointed by a president that lost the popular vote, and confirmed by senators who represented a minority of the US population.

Even within the current legal landscape, communities can combat the power of money in politics by ensuring that every eligible voter is registered to vote and able to access polling places and absentee ballots. The ProGov21 Voting Rights Policy Roadmap offers a variety of tools, like automatic voter registration and expanding voting sites, that facilitate voting and strengthen democracy. 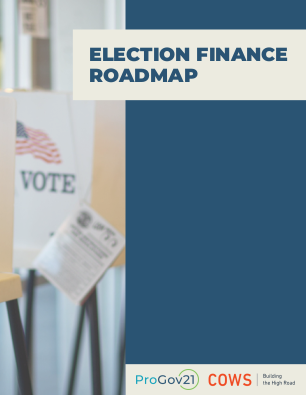