What’s the Problem & How are Progressives Addressing It

Local municipalities should have the political power to create local solutions for local problems. This principle, known as home rule, reflects core American values of local self-government and self-determination. However, across the country, state legislatures have increasingly used the legal doctrine of preemption (also known as Dillon’s Rule) to promote corporate interests by preventing local governments from addressing local problems. While “floor” preemption statutes create standards that communities may exceed (such as a state minimum wage law that grants local communities the power to set a higher, but not lower, minimum wage), state legislatures use “ceiling” preemption to prevent localities from exceeding state standards on minimum wage, paid sick leave, wage theft, rent control, the “gig” economy, workers’ rights, municipal broadband, taxation and expenditure, and inclusionary zoning. Often, when municipalities take action to protect their communities from corporate predation, corporate interests will lobby state legislatures to preempt the local laws constraining their rapaciousness: After Miami-Dade County passed anti-wage theft legislation in 2011, and recovered more than $500,000 in wages for 400 workers, corporate interests used lobbying dollars and campaign contributions to the Florida State Legislature, and by 2019 a state law was passed negating local wage theft laws. Preemption is becoming a more popular strategy: more than 115 preemption laws limiting workers’ rights and protections were passed by state legislatures between 2011 and 2019, compared to just 15 laws between 1984 and 2010.

Thankfully, there are ways local governments can combat preemption and restore local democracy. They can fight directly for home rule by making it a political issue, raising awareness of how preemption laws undermine local communities, and mobilizing constituents to fight preemption. While taking on preemption directly, local officials can also use workarounds to negotiate preemption and strengthen home rule, including implementing incentives for high-road economic activity, using local control over building codes and zoning codes to influence development, and using their own procurement dollars tax incentives to encourage, but not mandate, desired activity.

To protect local democracy from growing state interference, cities and counties must take steps to actively fight preemption. The most direct strategy they can use is to lobby state legislators, voters across the state, and their own constituents to repeal or amend existing preemption laws, provide room for local leeway, or enact the desired local policy statewide. A successful instance of this can be observed in Colorado, where legislators lifted the state’s ban on local minimum wage ordinances (HB-1210) and repealed a clause that prevented local regulation and taxation of tobacco (HB 19-1033). The National League of Cities has created a model home rule state constitutional amendment that local officials and activists can promote to fight preemption and strengthen local control.

Persuading state legislatures can be challenging. Communications guides from the Mayors Innovation Project and Grassroots Change provide effective strategies for messaging against preemption and for local control. Local elected officials and activists can expand the reach of their work by building coalitions with advocacy groups, constituencies, and other municipalities. Ohio Mayors Alliance, for example, is a coalition of mayors that have joined forces to advocate for local control and the preservation of home rule. Cross-issue alliances can also be effective: although members’ interests may differ, preemption poses a threat to policy goals in every policy area, making combatting it is a shared goal. LOCAL Maryland is a cross-issue coalition composed of groups like Voices for Healthy Kids and National Employment Law Project. In 2019, the alliance helped pass a bill to raise the state’s minimum wage without a clause that would preempt higher local minimum wages being set. Another model example is Texas’s Coalition Against State Interference (CASI). With members like Planned Parenthood Texas Votes and Workers Defense Project, CASI defeated bills that would have banned fair scheduling ordinances, paid sick leave ordinances, “ban the box” ordinances, and more.

Local governments can also challenge preemption laws in the courts. Although local governments face many disadvantages when attempting to sue their states, winning is not impossible. In Pittsburgh, the city’s paid sick leave ordinance was restored by the Pennsylvania Supreme Court after being preempted by the state in 2015. For more information on legal remedies, New America has published a report outlining possible arguments municipalities can make when fighting preemption in the courts.

The effectiveness of the strategies outlined above is, unfortunately, neither immediate nor guaranteed. At the same time local governments pursue direct challenges, they can engage other strategies to navigate around preemption. The first step localities can take is to “push the limits” of preemption laws and draft policies that narrowly fit alongside state legislation. Further, cities and counties can often achieve their policy objectives by establishing incentive programs, which grant tax incentives or other rewards for specific actions, or by altering building codes and zoning codes to set certain requirements. See ProGov21’s Land Use Roadmap for more information on how municipalities can use building and zoning codes to drive high-road economic development. Procurement is another powerful tool for shaping local development. ProGov21’s Procurement Roadmap has more information on how municipalities can use their spending power to encourage progressive business practices.

All local governments raise revenue for spending on goods and services, and courts have long held that governments are free to set terms and conditions when they spend their locally-raised revenue (see Building and Constr. Trades Council v. Associated Builders and Contractors, 113 S. Ct. 1190 (1993)). As market actors, municipalities have the same sovereignty as other consumers to spend in line with their values. However, government procurement officers typically pay attention to only the price of the service or product offered by vendors. Municipalities can and should establish procurement policies to incentivize behavior in areas where state preemption prevents them from acting directly: for example, in states where local minimum wage laws are preempted, local governments can develop procurement policies that give preference to suppliers that pay a living wage. Oakland, CA, passed legislation in 1998 that gave preferences for procurement dollars to vendors that paid a living wage and provided 12 paid days off per year.

The greater the amount of procurement spending governed by high-road procurement policies, the more effectively localities can achieve goals that they are preempted from legislating: more dollars spent pro-socially, the more businesses will be incentivized to meet higher standards—with or without a change in state law. For this reason, local activists and elected officials in different municipalities should work together to establish corresponding procurement policies. Many states already encourage local entities to use cooperative purchasing, where two or more entities purchase goods or services together, resulting in greater purchasing power and cost savings. By coupling cooperative purchasing with high-road procurement standards, local governments can work together to achieve goals that reflect local democratic preference, despite state preemption efforts. Further, local governments can encourage anchor institutions (place-based economic actors like airports, universities, and hospitals) to adopt similar procurement policies for their own spending. Even when local governments don’t have the power to legislate the will of local constituents, they can use their spending powers to advance local democratic consensus. See ProGov21’s road maps on Procurement and Anchor Institutions for more. 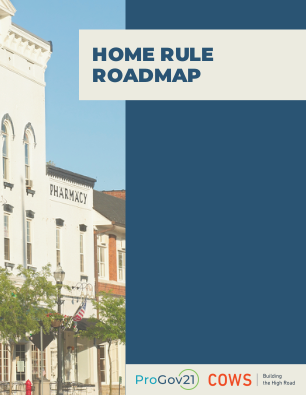