While American workers are among the most productive in the world, American jobs are increasingly bad jobs, with low pay, unpredictable hours, and little stability. Before the pandemic 44 percent of all US workers were in jobs that qualified as “low wage,”  with median wages of  $10.22 per hour and median earnings of approximately $18,000 annually. Workers in these jobs are routinely denied rights and protections in the workplace and suffer from dangerous working conditions, discrimination on the job, wage theft, and union busting. Historically, unions have helped working people negotiate with their employers for better hours, raised incomes, and improved working conditions, and to this day the average unionized worker earns 11.2% more than their non-unionized colleagues. However, due to a combination of legal and illegal tactics employers use to prevent their workers from organizing, union membership has declined by over 57 percent from 1979 to 2019. Although the American labor movement’s record on racial and gender equality has been checkered, its decline has left women and minorities disproportionately vulnerable to exploitation. However, the effects of this disempowerment is pervasive, and American workplaces are more dangerous than those in comparable developed countries.

Local governments can take action to create safe and equitable working conditions for all workers by using their regulatory power (where possible) to establish wage floors and employment standards around equal opportunity, overtime pay, workplace safety, and employee empowerment. However, these efforts are often obstructed by state preemption laws that limit the legislative power of local governments, and 43 states have preempted at least one type of labor law (see the Progov21 Home Rule Roadmap and EPI’s Preempting Progress in the Heartland for more on preemption).  Where possible, local governments should pass laws to set minimum standards for proper safety training, discrimination, and training on preventing sexual harassment in conjunction with policies that guarantee rest breaks, meal breaks, medical care, and proper safety equipment for workers (see our Wages & Benefits Roadmap for more on worker benefits and living wage legislation).

However, even in states where local legislation is effectively preempted, local officials can use their power in the marketplace to encourage workplace equity and safety. Counties, cities, and towns are major purchasers of goods and services: local governments can establish policies that require recipients of this spending to establish best practices around discrimination, equal opportunity, equal pay, and collective bargaining. See the ProGov21 Procurement Roadmap for more on using municipal spending to create equitable and sustainable local economies.

Local officials can improve workplace equity by using municipal resources to enforce state and federal workplace regulations that protect workers' health, safety, and employment rights. Extant laws like Title VII of the Civil Rights Act and the Occupational Safety and Health Act are consistently and systematically violated due to weak enforcement mechanisms and coverage gaps. Cities and counties can strengthen enforcement by building and funding local labor standards enforcement agencies. These enforcement agencies can collaborate with health officials, worker centers, community based organizations, legal service providers, and more, to ensure that they are accessible and free to low-income individuals and immigrants interested in submitting complaints; they can also partner with local government contracting agencies to revoke or deny city contracts to businesses that violate labor laws (see the Progov21 Procurement Roadmap for more). Policymakers should also prioritize enacting anti-retaliation ordinances (which are not preempted by state law) to ensure that complaints are not met with reprisal. Most importantly, local governments should shift to “investigation-driven” enforcement and conduct routine investigations in industries where racial and gender discrimination are common, or where companies regularly take advantage of undocumented workers.  Investigation-driven enforcement requires agencies to develop relationships with community institutions (like as unions or churches) can act as information conduits, rather than relying solely on worker complaints to drive actions.

Perhaps the most effective way cities and counties can protect labor and employment rights is by restoring workers’ collective bargaining power. Employers proactively investigate illegal  union-busting tactics that prevent employees from organizing. Local government procurement officers can require that recipients of local government spending enter neutrality agreements to not interfere in workers’ organizing efforts. Lastly, local governments can use their proprietary interests in development projects to require businesses and unions to sign labor peace agreements. These agreements require the employer to not oppose union organizing, and prohibit union members from engaging in strikes, boycotts, or pickets that can disrupt the local government’s economic interests.

Many localities have acted to limit the spread of COVID-19 in the workplace. Hundreds of cities across the United States, including Los Angeles, Milwaukee, Oakland, Palo Alto, and Tampa, have adopted mandatory vaccination requirements for all employees. On top of such policies, Sacramento has also enacted an ordinance mandating employers to implement certain physical-distancing, mitigation, and cleaning protocols. Chicago and San Francisco have passed laws aimed to prevent retaliation against employees who miss work to get COVID vaccines. For businesses looking to further prevent disease transmission, OSHA has developed a guide outlining steps employers can take to reduce workers’ risk of exposure to COVID-19.

Even in the absence of COVID-19, municipalities must continue to protect workers’ health by actively fighting against poor working conditions. This phenomenon can be seen in Austin, for example, where they enacted an ordinance requiring mandatory rest breaks for all construction workers. Other cities, such as Emeryville, San Francisco, San Jose, and Seattle have passed fair scheduling ordinances, which mandate employers to post schedules two weeks in advance, grant workers one extra hour of pay for each shift that is changed with less than seven to fourteen days’ notice, and allow workers the right to request additional hours, changes in times of work, limitations on availability, and more. Moreover, companies in Shell Lake, Wisconsin and Erie, Pennsylvania have partnered with consultation programs, such as WisCon and Indiana University of Pennsylvania OSHA Consultation program, to improve safety on the job; these programs conduct regular health and safety visits, where staff identify hazards within the facilities and provide recommendations to remedy them.

To achieve equitable working environments, municipalities must address inequality within the workplace. As of January, 2021, 225 cities and counties, including State College and New York City, have adopted ordinances prohibiting employment discrimination on the basis of gender identity. At a smaller scale, organizations like “We Dream in Black” fight for better pay, protections, and respect for Black female domestic workers. Wake County, NC and Raleigh City, NC have used their legislative power to expanded extant non-discrimination to prohibit discrimination against individuals based on their sexual orientation, gender identity, and natural hairstyle in both the workplace. Furthermore, businesses can also utilize training as a useful tool to mitigate discrimination against marginalized groups. In particular, municipalities, including New York City and Dane County, have implemented ordinances requiring anti-sexual harassment training, while others, like Los Angeles and San Francisco, have mandated implicit bias training.  The City of Oakland passed a Good Jobs Policy mandating 50 percent of jobs associated with redevelopment of a decommissioned army base into a warehouse and logistics hub be reserved local workers, 25 percent of the jobs be reserved for disadvantaged workers, limited the use of temporary workers in warehouses, and banned pre-screening for criminal records. 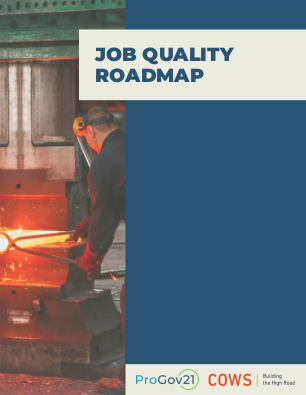