What's the Problem & How are Progressives Addressing It

The COVID-19 pandemic has exposed pre-existing problems in municipal revenue systems. Federal and state governments have systematically pushed responsibilities onto the local level without providing adequate financial resources, leading to budget shortfalls. Between 1977 and 2017, state and local governments collected less than 96 cents in revenue for every dollar of spending. These shortfalls have led to budget deficits and reduced services, both of which have disproportionately impacted working class communities and communities of color. These same communities have been hit hardest by the pandemic, further reinforcing these inequalities. This shortfall is also driven by the ability of powerful actors, including corporations and private individuals, to avoid paying their fair share of taxes. Many local governments have become dependent on regressive mechanisms like service fees to patch their budgets: in fact, fees now constitute the second largest source of non-transfer income for municipal governments (with property taxes being the first).

However, local tax codes can be progressively structured to promote equity, reduce inequality, provide public services, and create jobs even while they help dig municipalities out of the hole the pandemic blew in the budget. Making sure that wealthy individuals and powerful corporations pay their fair share helps bring about more economic equality even before that money is spent. Providing sufficient funding to make high-quality schools and social services available in every community can improve racial and class equity. When taxes adequately fund public services, public employees are in the position to contribute to their community while enjoying economic stability. Lastly, local governments need to effectively utilize federal and state programs designed to provide aid during the COVID-19 pandemic.

Progressive goals in local tax policy should aim to use high-road taxation strategies to raise funds necessary to maintain and improve public investment. These goals should be achieved through progressive taxation programs that place financial burdens on wealthy individuals and corporations that can most afford to bear them. By making taxation and revenue programs transparent, neutral, and stable, public officials can create trust between themselves and their constituents and greater support for innovative policies.

The first step to creating an equitable and just local revenue policy is to eliminate regressive fees and fines from the local tax codes. Depending on these mechanisms shifts the cost of funding local government onto those who can least afford to bear it, and has the effect of criminalizing poverty. For example, if a community decides to raise funds by increasing fees for parking permits, working class people will pay a much larger percentage of their income for parking compared to the wealthy. People who can’t afford to renew their permits will get fines, making it even more difficult to renew their parking permits, leading to more fines. Eventually, people’s non-payment of these fees will result in the suspension of their driver’s license. If they continue to use their car, say, because it’s necessary to get to their place of employment, they will be rendered criminals for the simple fact that they are too poor to pay their parking permit fees but still need to use their car if they want to keep a roof over their head.

Progressive municipal income taxes, for both individuals and corporations, are a much more equitable means of raising funds, and should be used instead of fines and fees when possible. In a progressive tax system, the tax rate is tied to the amount earned: suppose there are tax brackets of 10%, 20%, and 30%, where the 10% rate applies to income from $1 to $30,000; the 20% rate applies to income from $30,00.01 to $60,000; and the 30% rate applies to all income above $60,000. On the first $30,000 of income, someone earning $30,000 annually and someone earning $100,000 annually will both pay $3,000 in taxes. For the person earning only $30,000, that will be their entire tax bill. The person earning $100,000, however, will pay an additional $6,000 in taxes on their income between $30,00.01 to $60,000, and $12,000 on the income they make above $60,000. This means that the people who can most afford to pay more are the people who do in fact pay more. In situations that impact certain industries and types of work more than others, like the current COVID-19 pandemic, the tax burden is automatically shifted to people whose incomes have been less effected than their neighbors. Currently, municipal income taxes are permitted only in 17 states, and many states use preemption to eliminate this policy option. See our Home Rule Policy Roadmap to learn more about how you can fight preemption to achieve local control.

There are other strategies for allocating the tax burden onto parties most able to bear it. In states where income taxes are not possible, mansion taxes or second home taxes may be an effective way of forcing those with more to pay more. Consumption taxes, such as sales and excise taxes, are steeply regressive. Poorer families that use a greater share of their income on purchasing daily necessities like food and clothing are hit the hardest. However, wealthy families, who use a relatively small portion of their income on things like food and clothing, while spending heavily on tax exempt items like financial investments or out-of-state property, will be able to avoid paying their fair share.

Lastly, cities and towns should close corporate tax loopholes whenever possible, and resist engaging in a race-to-the-bottom to try to attract more corporate investment. While corporations and rich individuals promise to magically create universal growth and prosperity, this is not the case: large tax cuts for corporations and those in the highest income tax brackets have been shown to have almost no direct correlation with economic growth. Instead, they pocket the money at everyone else’s expense. The Congressional Research Service found this to be true after conducting a 65-year study on the effect taxes have on broader economic growth trends. Any money spent on tax breaks to attract corporate entities would be better spent improving infrastructure and human capital to attract many employers, and are critical to corporate decision making. The expansion of public services and public investment is vital in increasing the productivity and growth of local economies, and should be the priority of progressive political leaders. Budget shortfalls, however, have made public investment more scarce this past year in the face of the pandemic and economic flux.

Many city-level policymakers have responded to growing wealth and income inequality by reducing the repressiveness of local revenue systems. One way cities can do this is by instituting a progressive city income tax, where permitted by state law. For example, on top of its state tax, New York City has implemented a graduated rate schedule with four tax brackets, each subject to different rates (ranging from 3.078% to 3.876%) depending on income levels and filing status; as taxable income increases, it is subject to higher tax rates. Not only does this system of progressive taxation provide a source of increased revenue to New York City, but it captures a larger share of income from wealthy families than low- and middle-income families, easing the burden off those who cannot afford it. Additionally, cities with income taxes can further improve progressivity by creating a city- or county-level earned income tax credit (EITC). New York City’s implementation of an EITC has provided significant economic assistance to low-income residents. San Francisco, on the other hand, has supplemented the federal EITC by establishing the Working Families Credit, which was designed to encourage take-up of the federal EITC by matching it locally.

Many cities have addressed the budget shortfalls by shifting municipal budgets away from fines, fees, or consumption taxes. A report done by Local Progress shows how various cities across the U.S., including Portland, San Francisco, and New York City, have implemented local corporate income taxes, which increase the revenue of local governments and alleviate the dependence on consumption taxes.

The expansion of public services and public investment is vital in increasing the productivity and growth of local economies. Budget shortfalls, however, have made public investment more scarce this past year in the face of the pandemic. The Environmental Protection Agency released a publication assessing how small towns and cities across the country have used their local assets to rebuild their economies.

Financing of schools through property taxes ensures that community wealth disparities carry over into education and are reinforced for the next generation. Property taxes are the primary source of funding for public schools. Property tax rates and revenues also vary widely between wealthy and poor areas, creating funding gaps from the very beginning. Affluent areas with valuable real estate can use relatively low property tax rates to generously fund local public schools. Good schools, in turn, make the community attractive to new residents and lead to higher real estate prices. Low-income areas need to use much higher property tax rates, but because property values in these communities are suppressed, they still end up with poorly funded schools—which continues to depress property values. Using local property taxes as the primary source of funding for education funding inherently disadvantages low income and minority students.

Municipalities can also use the tax code to disincentivize pollution and emissions. Markets and business leaders often fail to account for the costs of corporate behavior that damages the public and the environment but not the bottom line, but targeting this noxious behavior through the tax system can change that calculus. Environmental taxes are most effective when they target the pollutant or polluting behavior, with very few or no exceptions and carve-outs. Funds raised from these taxes can be used on greening infrastructure to help address climate change, or for other important services in the communities most effected by the pollution.

Visit the following groups for more great material on municipal revenue, or check out the ProGov21 data base for other resources on this topic. 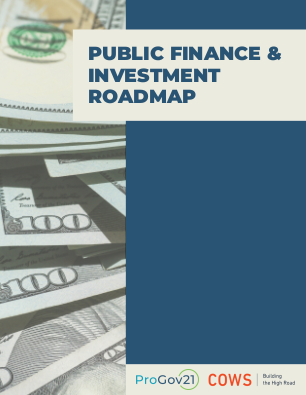