Compared to police forces in other OECD countries, U.S. police are hired less selectively, receive less training, have less oversight, and kill civilians far more often (Haberfeld 2016, Hirschfield 2015, Jones and Sawyer 2020). Between 2013 and 2019, U.S. police killed an estimated 7,638 people compared to 224 in Canada (Cheatham and Maizland 2021). Despite these facts, U.S. citizens have above average trust for their police forces. The percentage of Americans who had a “great deal” or “quite a lot” of confidence in police was 82 percent in 2020, compared to OECD averages of 78 percent (OECD Government at a Glance 2021). U.S. police have strong political support from most local governments, which is reflected in the $115 billion spent on policing in America in 2020, and police unions effectively use their political power to challenge reform-minded local officials.

The contradiction between the quality of U.S. policing and political support the police receive becomes more problematic when the complicated statistical relationship between policing staffing levels, police funding levels, and crime rates is considered. Many studies have found no relationship between police funding, staffing and crime  (Lee, Eck, and Corsaro 2016, Lim, Lee, and Cuvelier 2010). This does not mean that crime rates would be unchanged if there were no police; rather within the range of changes observed, there is no detectable relationship to crime (Payne 2017). Certain high-quality studies, however, find that police staffing levels have a significant impact on violent crime, but not property crime (Chalfin & Mcrary 2018). There is also evidence that certain types of police interventions, such as focused-deterrence strategies and problem-oriented policing, have significant impacts on crime rates, at least temporarily (Lee, Eck, and Corsaro 2016).

The key component of progressive police reform is to (1) acknowledge that punitive actions and armed responses cannot adequately address social problems; (2) deploy police in ways that can effectively promote public safety, rather than as a one-size-fits all solution; and (3) re-provision resources from policing and the prison-industrial complex toward welfare  and social services programs, that have been found to reduce crime (Fishback, Johnson, Kantor 2010, Chioda, De Mello, and Soares 2012,Meloni 2013).  Municipal governments should partner with local organizations and major social institutions to implement rehabilitative strategies and holistic wraparound services around education, food, housing, transportation, job training, and worker protections. (See also our roadmaps on Education, Food, Housing, Transportation, Health, Economic Equality, Job Quality, and Wages & Benefit).

When crime presents itself in a local community, it should be addressed using focused, empirically validated policing strategies. Problem-oriented policing refocuses police attention away from police agency’s reactive, incident-driven model of policing and towards identified problems. The SARA model is a representative method of problem-oriented policing: (1)“scanning” by the police force to identify and prioritize potential problems; (2) “analysis,” a thoroughly examining identified problems through several data sources to develop an appropriate response; (3) “response,” where the police develop and implement interventions designed to solve identified problem; (4) and “assessment,” or evaluating the impact of the response (Weisburd, Telep, Hinkle, Eck 2010).  Hot spot policing, pioneered in Minneapolis, begins by understanding that the geographical distribution of crime varies within communities, and that relatively small areas (such as a cluster of blocks) may account for an outsized volume of crime. Hot spot policing tactics might include directed patrols of the area, heightened levels of traffic enforcement, or other problem oriented policing strategies. Focused-deterrence strategies, pioneered in Boston’s Operation Ceasefire, seek to increase the perceived costs of crime so that they outweigh the benefits of criminal action. These programs prevent violence by reaching out directly to high-propensity individuals with messages that violence would no longer be tolerated, and responding with every legal policy option when violence occurred. This outreach by the police was coupled by outreach from youth workers, probation and parole officers, churches and community groups, who worked to connect high-propensity individuals to services while messaging that violence was unacceptable to the community. All the above strategies have been found to be more effective than simply increasing police funding or staffing, and move policing away from reactive, incident-driven model that alienate community members without actually solving the problem of crime.

Cities and counties should also reform outdated use of force standards. Campaign Zero’s model use of force policy requires officers to de-escalate situations and give a verbal warning before using force, restricts chokeholds, prohibits officers from shooting at moving vehicles, requires officers intervene when another officer is using excessive force, and more. Tampa FL, Brookfield WI, and Beaverton OR are just a few examples of cities that have updated their use of force policies in accordance with Campaign Zero’s 8 Can’t Wait recommendations, which include mandating warnings before officers shoot and banning chokeholds and shooting at moving vehicles, to name only a few. To further reduce unnecessary violence, municipalities can restrict the use of  SWAT teams and no-knock raids, ban the acquisition of military equipment, and more. Police demilitarization legislation has been adopted in Charlottesville VA and Berkeley CA, and the ACLU has published a sample resolution to demilitarize local police forces in Ohio.

Even the best use of force standards are ineffective if they are not enforced. In response to violations, local officials can hold officers accountable by removing barriers to investigation from police contracts. The Coalition for Police Contracts Accountability (CPCA) outlines potential reforms to Chicago’s police union contracts, including the removal of constraints on how interrogators can ask questions and provisions that prohibit the disclosure of accused officer’s names. Moreover, establishing civilian review boards allows for communities to oversee their local police departments, thereby furthering democratic principles. In Madison WI, Berkeley CA, Portland OR, and Orange County CA, a civilian review board gives community members the opportunity to investigate police misconduct and make recommendations.

Cities should critically analyze their police departments and the various intersections police have in the community and work to decriminalize low-level, non-violent offenses. TransitCenter details how Cities should decriminalize fare evasion, remove police from Transit, and cease to criminalize unhoused persons on Transit. Cities like Madison, WI and Milwaukee, WI have effectively decriminalized marijuana by reducing the fine for the possession or consumption of marijuana to the minimum amount allowable by state law. Cities can also  decriminalize sex work and address it instead as a public health matter.

Municipalities can also reallocate funds from local police departments and invest them into programs that address the root causes of crime. In Pittsburgh, local officials enacted an ordinance allocating 5-10% of the police budget towards violence prevention programs. Similarly, the Austin City Council decided to redistribute the police budget funds to substance use treatment. Communities can also invest in community-based public safety efforts by establishing civilian-led Office of Neighborhood Safety (ONS). An ONS serves as a hub for community members, stakeholders, and city representatives to collaborate on public safety strategies, including transformative mentoring and violence interruption. Successful ONSs have been launched in Richmond, New York City, and Baltimore.

As communities rethink their strategies towards crime reduction, many are seeking to save tax-payer dollars by addressing the social determinants of criminal behavior. An increasing number of cities , including Olympia, WA;  Eugene, OR; San Fransisco, CA; Denver, CO; Madison, WI are implementing Community Responder Programs that shift low-level crime and non-criminal 911 calls to civilian responders that specialize in behavioral health, community health, harm reduction.. The CAHOOTS program in Eugene, OR, and the Crisis Response Unit in Olympia, OR, serve as model examples of community responder programs in action. Too often, police are the only tool communities have to address mental health crises and other non-criminal behavior, leading to tragic results. Fundamentally, we must cease criminalizing the failure of our public health systems.

Municipalities can also improve outcomes by rethinking how they approach the intersection of public health and criminal justice. The Williams Institute proposes public health and public safety measures for Criminal Justice response to COVID-19, include treating violations of COVID-19-related laws as public health matters through specialty courts, evidence-based models of correctional health care, and dedicated re-entry services. Efforts to treating substance use as a public health matter include Opioid Overdose Reversal & Legal Immunity, Overdose Good Samaritan Laws, and an increase in funding for mental health and addiction services. 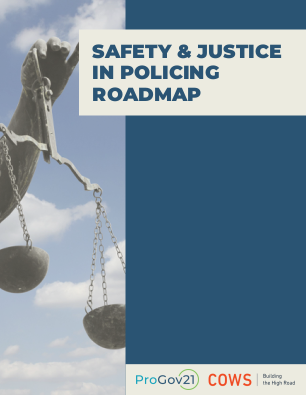