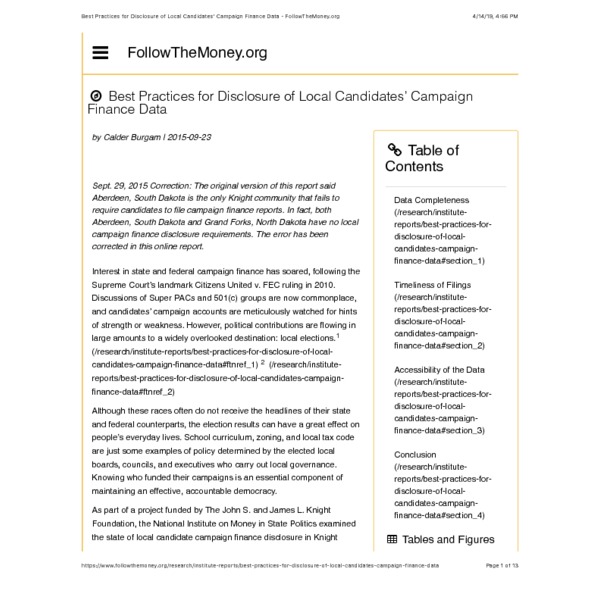 "Interest in state and federal campaign finance has soared, following the Supreme Court’s landmark Citizens United v. FEC ruling in 2010. Discussions of Super PACs and 501(c) groups are now commonplace, and candidates’ campaign accounts are meticulously watched for hints of strength or weakness. However, political contributions are flowing in large amounts to a widely overlooked destination: local elections.1 2 Although these races often do not receive the headlines of their state and federal counterparts, the election results can have a great effect on people’s everyday lives. School curriculum, zoning, and local tax code are just some examples of policy determined by the elected local boards, councils, and executives who carry out local governance. Knowing who funded their campaigns is an essential component of maintaining an effective, accountable democracy. As part of a project funded by The John S. and James L. Knight Foundation, the National Institute on Money in State Politics examined the state of local candidate campaign finance disclosure in Knight Foundation’s 26 communities.3 This report identifies some of the best practices for candidate campaign finance disclosure in three key areas—completeness, timeliness, and accessibility—and highlights those Knight Foundation communities that have instituted such practices."
Download Link