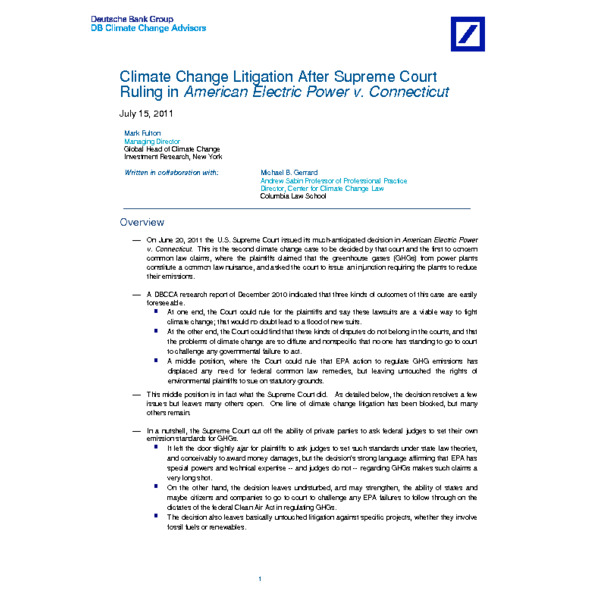 On June 20, 2011 the U.S. Supreme Court issued its much-anticipated decision in "American Electric Power v. Connecticut." This is the second climate change case to be decided by that court and the first to concern common law claims, where the plaintiffs claimed that the greenhouse gases from power plants constitute a common law nuisance, and asked the court to issue an injunction requiring the plants to reduce their emissions. The Supreme Court ruled that these kinds of disputes do not belong in the courts, and that the problems of climate change are so diffuse and nonspecific that no one has standing to go to court to challenge any governmental failure to act. This decision resolves a few issues but left many others open including: 1) whether the Supreme Court's decision bars all federal common law nuisance claims, or only those that sought injunctive relief and 2) whether the Clean Air Act preempts state public nuisance litigation over GHGs. The Supreme Court ruling along with the ensuing climate change litigations, such as challenges to federal regulations, state regulations, coal plants, and environmental impact reviews, are the subject of this report.
Download Link