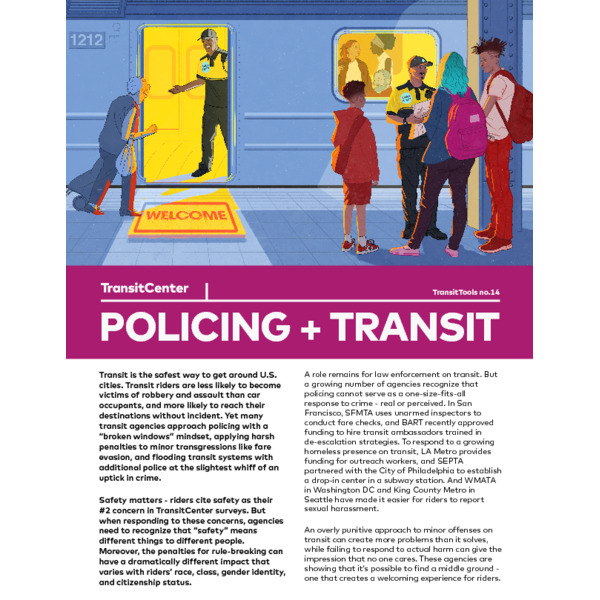 Many transit agencies apply an overly punitive approach to minor transgressions. For example, this report argues that current methods of fare enforcement are too harsh. Fare evasion should be decriminalized, and the penalties should be made proportional to the severity of offense. In addition, enforcement should also be conducted by unarmed fare inspectors, not police. Similarly, criminalizing homeless people on transit is not an effective solution; transit agencies should invest in outreach workers and seek opportunities to partner with local municipalities instead. Lastly, rather than increasing the number of police officers on board, transit systems should tackle sexual harassment by making it easier to report, dedicate trained staff specifically to the problem, and hire transit ambassadors to patrol the system.

A Transit Agenda for the COVID-19 Emergency 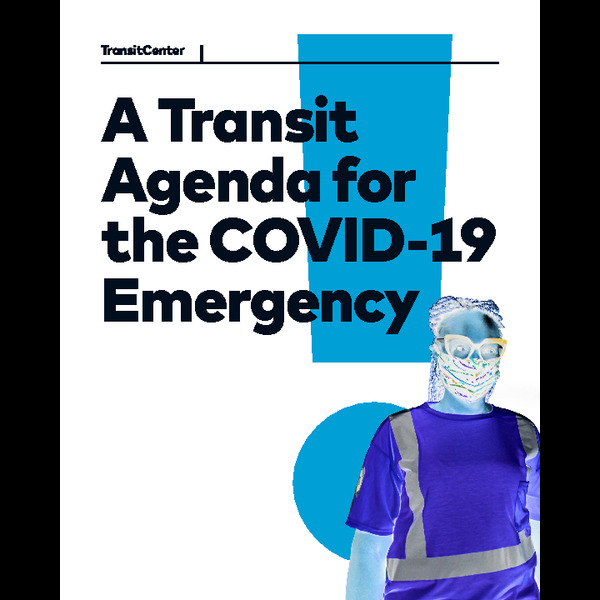 A Green New Deal For City and Suburban Transportation 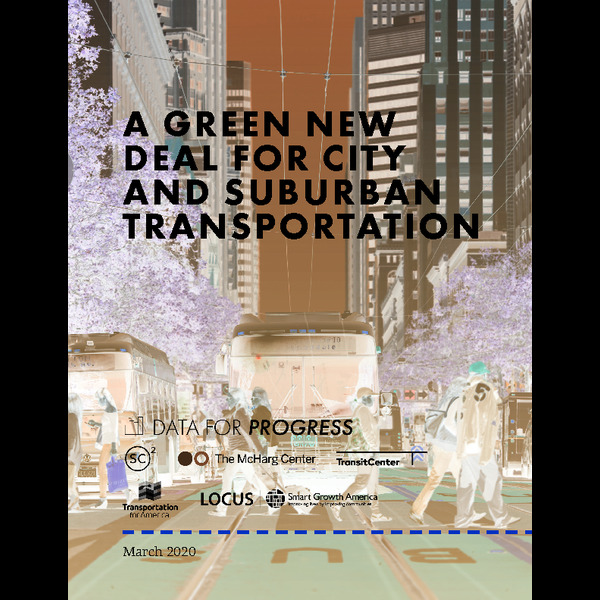 Transportation is the United States’ single largest source of greenhouse gases (GHG), accounting for 29 percent of emissions. This report outlines the problems behind the U.S. transportation system that have led it to become an enormous source of carbon emissions. Firstly, federal transportation policy prioritizes building highways between job centers and typically wealthier, whiter areas, forcing Americans to drive more and further, increasing carbon emissions, and limiting mobility and opportunity for people of color and people with low incomes. Secondly, states are permitted to spend funding on road expansion while neglecting repair needs, ultimately inducing more driving. Thirdly, federal spending leaves limited funds available for more sustainable modes of transportation, like transit, walking, and biking. In response to these problems, this report also provides a series of policy recommendations to reduce greenhouse gas emissions.

The Limits of Microtransit 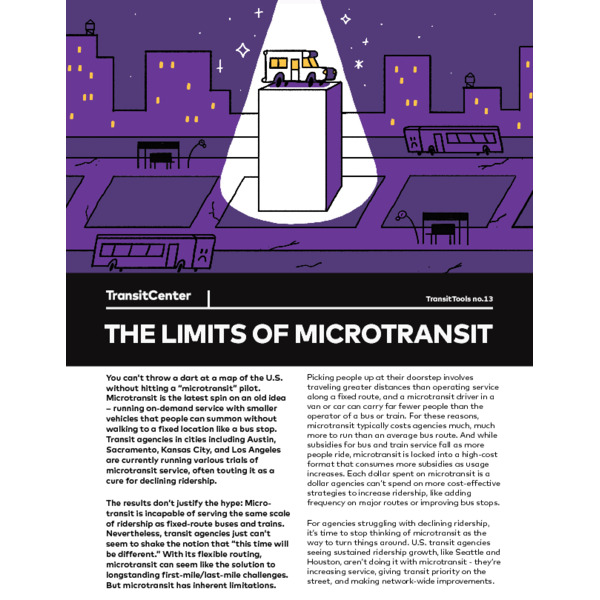 Microtransit involves running on-demand services with smaller vehicles that people can summon without walking to a fixed location like a bus stop. This brief argues that microtransit is incapable of serving the same scale of ridership as fixed-route buses and trains. Microtransit is more expensive to run than fixed routes, and money spent on microtransit would benefit more people if spent on fixed-route service or improving pedestrian access to stops and stations. While microtransit cannot replace bus service, it can serve other roles, such as paratransit services. 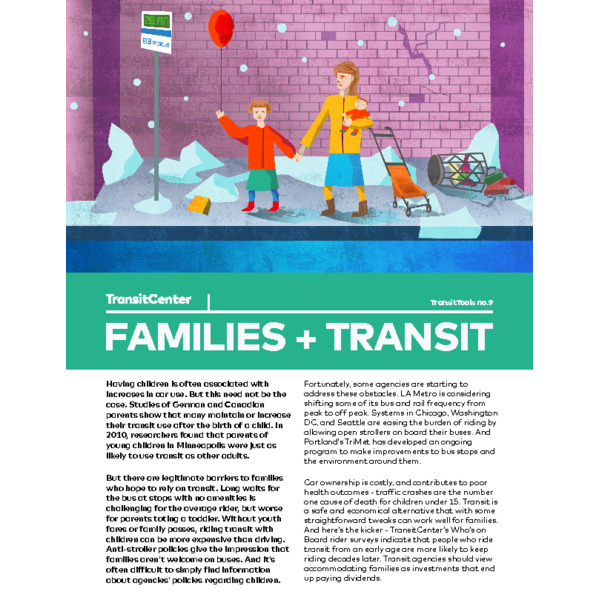 Having children is often associated with increases in car use, due to barriers preventing families from relying on transit. For example, anti-stroller policies signal that families aren’t welcome on buses, while riding transit can be more expensive than driving, without youth fares or family passes. In order to make transit more family-friendly, this brief proposes that transit systems expand service (to accommodate school pick up and drop off hours), implement flexible fares (i.e. youth passes, bulk discounts for families travelling together), and welcome infrastructure (by creating space for strollers and improving accessibility). 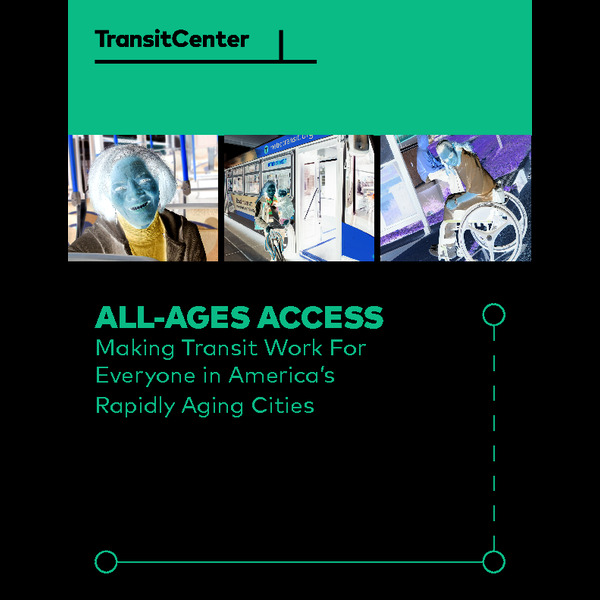 Transit can be especially important for older individuals, who “age out” of driving as their mobility, vision, and hearing decline. However, public transit can be difficult for older people to navigate, and is unreliable or insufficient for many trips in most U.S. cities. To address this challenge, cities can improve the accessibility and performance of fixed-route transit, implement services catering to riders with varying mobility needs (such as paratransit feeder service, route-deviation transit, and on-demand service) and improve the performance of paratransit through contract incentives and technology.

A Transit Agenda for the COVID-19 Emergency

Voting is the Easy Part: Why LA’s Measure M Hasn’t Led to Greater Transit Use 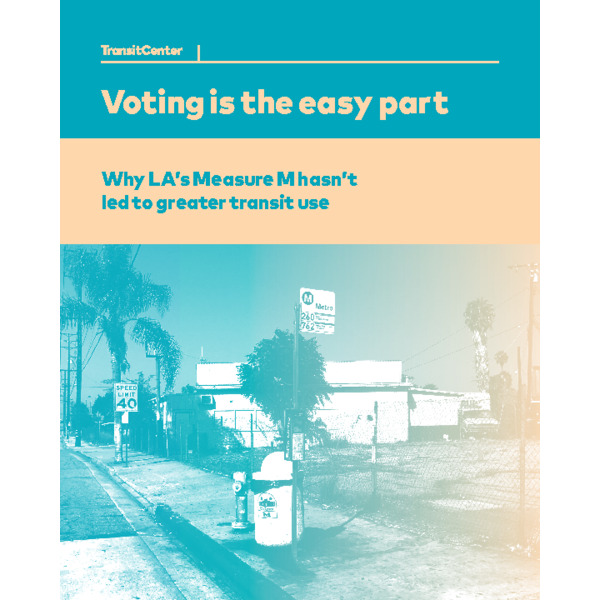 In 2016, citizens of Los Angeles voted in favor of Measure M, a ½-cent sales tax increase that will raise $120 billion over forty years for transit expansion and maintenance, and traffic and street improvements. Despite this, transit ridership in Los Angeles has continued to fall. This report studies why Los Angelenos are not using transit, despite voting for it. Results show that in LA, driving continues to be much more convenient and efficient than riding transit, due to LA’s low central, densities, high sprawl, wide roads, and massive amounts of parking. However, even with the funds to make transit more attractive, Los Angeles has continued to build streets and neighbors that cater to cars. Additionally, many “transit voters” are not in favor of the policies necessary to make transit work effectively.

Do Not Track: A Guide to Data Privacy for New Transit Fare Media 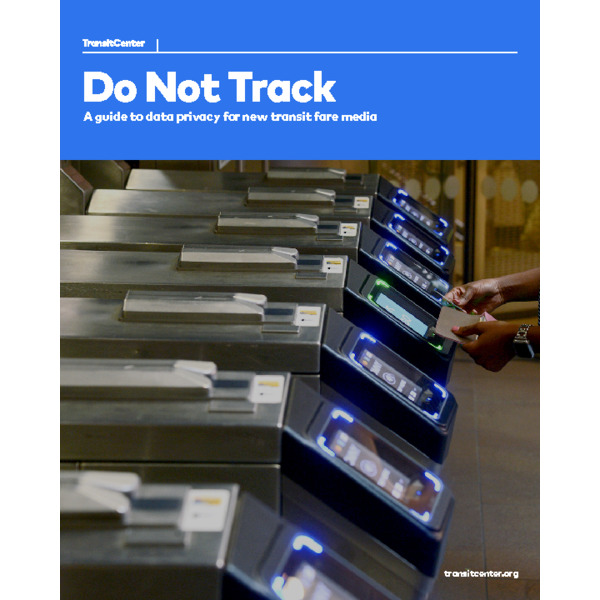 Public transit agencies nationwide are offering new payment options, but many of these methods have the potential to significantly increase the personal data collected by transit agencies and their private subcontractors. Once collected, the data can be accessed by other government entities, exposed via data breach, or sold to private companies (in the case of private sector data collection). This policy brief explores the privacy risks of new transit fare media and recommends methods agencies can adopt to safeguard riders’ privacy. In particular, transit agencies should ensure that riders retain the ability to pay without being linked to a credit card account or other personal identifier, make secure data management an organizational priority, clearly and transparently communicate privacy policies, and use data sources that protect personal privacy. 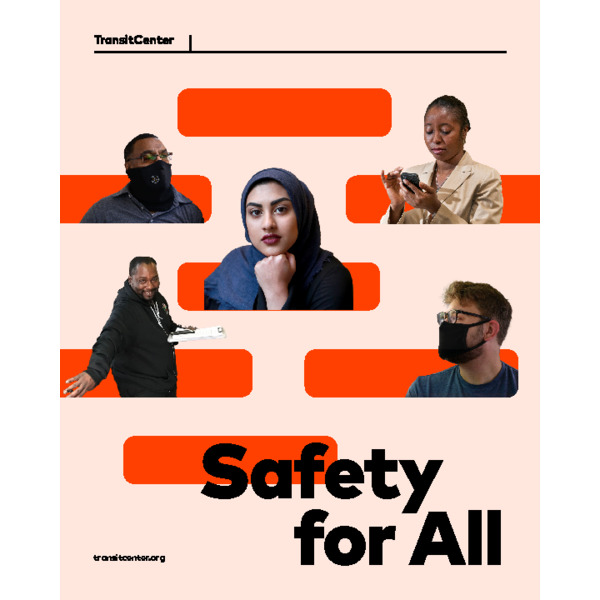 Incidents of harassment, crime, and violence on or near mass transit compromise riders’ safety, degrade their experience, and reduce utilization. Historically, transit agencies have sought to use a police presence to create a sense of safety and security. While police help reduce violent crime, the over-reliance on police for routine safety issues often makes riders less safe, and police response to “code of conduct” issues like putting feet on seats, eating food, or not paying fare is consistently discriminatory against Black and brown riders and regularly escalates into incidents of brutality. This brief reviews safety concerns faced by transit riders and operators and the spectrum of approaches transit agencies can take to address them, including non-police approaches.