Mobility Equity Framework: How to Make Transportation Work for People 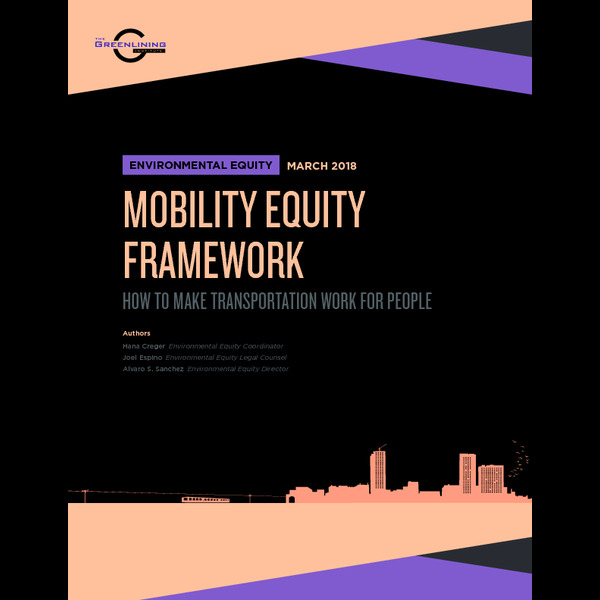 This report outlines a framework for mobility equity, or a transportation system that increases access to high quality mobility options, reduces air pollution, and enhances economic opportunity in low-income communities of color. Decades of local, regional, and state transportation plans and investments have not adequately responded to the mobility needs of low-income communities of color, reinforcing unequal land-use patterns and contributing to disproportionate health and economic impacts. Today, technological advancements are making it easier to address community-identified mobility needs with a multitude of clean transportation options. However, we lack the planning, policy, and decision-making structures that will equitably deliver mobility benefits to low-income communities of color. To establish a transportation system that benefits all people, California must embrace an equitable deployment of investments and policy interventions to prioritize the mobility needs of low-income individuals of color and address the historical neglect they have experienced. This type of reform must center social equity and community power as primary values in all transportation planning and decision-making. To get there, this paper proposes a framework designed to elevate these values and address structural inequities through an adaptable, customizable process for community, advocates, and transportation decision-makers.

This issue brief analyzes the inclusion of people of color in the workforce, contracting networks, and supply chains from 2014-2016 of eight federal government offices: Consumer Financial Protection Bureau, Federal Reserve Board of Governors, Federal Deposit Insurance Corporation, Federal Housing Finance Agency, National Credit Union Administration, Office of the Comptroller of the Currency, US Securities and Exchange Commission, and the US Department of the Treasury Departmental Offices. 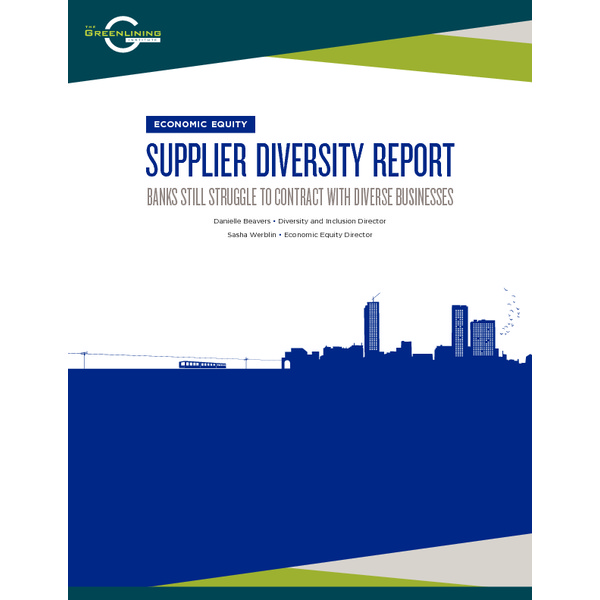 Supplier diversity is a powerful tool for economic development in communities of color. Minority Business Enterprises (MBEs) are more likely to operate as small businesses and employ locals, making them a pillar for communities of color. Contract opportunities from larger corporations allow MBEs to generate wealth, create jobs, and grow their businesses. Unfortunately, MBEs are still less likely than their white counterparts to break through the “old boy network” and obtain these contracts. Supplier diversity initiatives require neither quotas nor mandates for contracting with diverse businesses. Instead, they consist of intentional practices meant to improve access and opportunities for MBEs and level the playing field. From accounting to paperclips, banks annually spend trillions of dollars contracting with businesses for goods and services. These contract dollars create economic ripples that promote business growth, job creation, anddrive market innovation. In short, how banks spend money matters to the community. This contract spending is especially important to diverse communities and their local minority business enterprises. Even in the volatile economy of 2002 to 2010, MBEs consistently outpaced the growth of their white counterparts by total number of businesses and gross receipts. Nonetheless, MBEs experience barriers to winning contracts and generally do less business with banks. This report analyzes 2012-2014 supplier diversity spending at California’s eight largest banks. 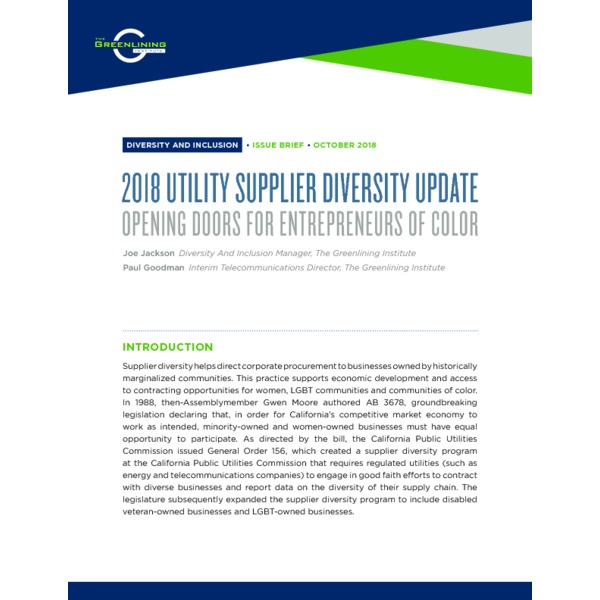 Supplier diversity helps direct corporate procurement to businesses owned by historically marginalized communities. The California legislature created a supplier diversity program at the California Public Utilities Commission that requires regulated utilities (such as energy and telecommunications companies) to engage in good faith efforts to contract with diverse businesses and report data on the diversity of their supply chain. The Greenlining Institute analyzed the 2017 supplier diversity reports of 18 utilities, including the telecommunications, energy, water and wireless industries. Overall, the percentage of procurement from diverse businesses remained virtually unchanged from outcomes reported in 2016, but a few stand-out companies did achieve relatively high spending with diverse businesses.

Maximizing the Earned Income Tax Credit in Your Community 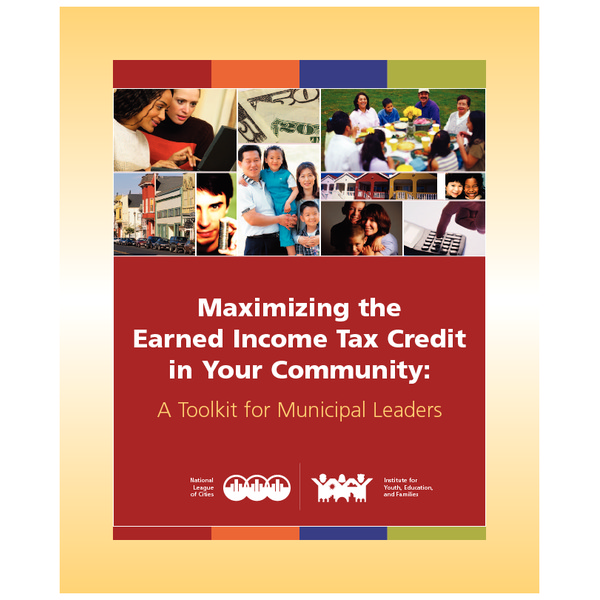 A city thrives when its residents thrive. Yet many families, even though they are employed fulltime, continue to struggle to meet their families' basic needs. Local elected officials across the country have discovered a way to strengthen working families while bringing more federal dollars into the local economy: by connecting eligible workers to the Earned Income Tax Credit (EITC). 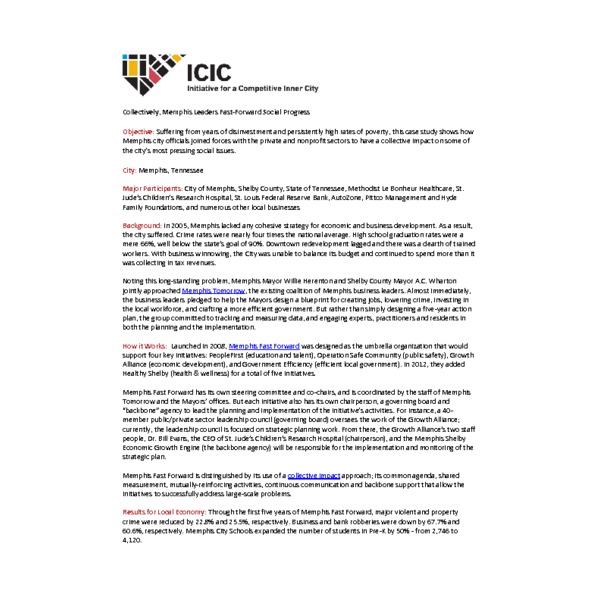 Suffering from years of disinvestment and persistently high rates of poverty, this case study shows how Memphis city officials joined forces with the private and nonprofit sectors to have a collective impact on some of the city's most pressing social issues. 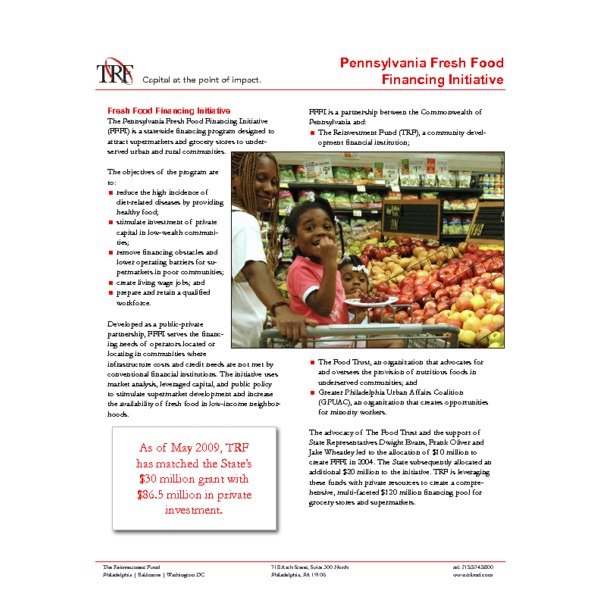 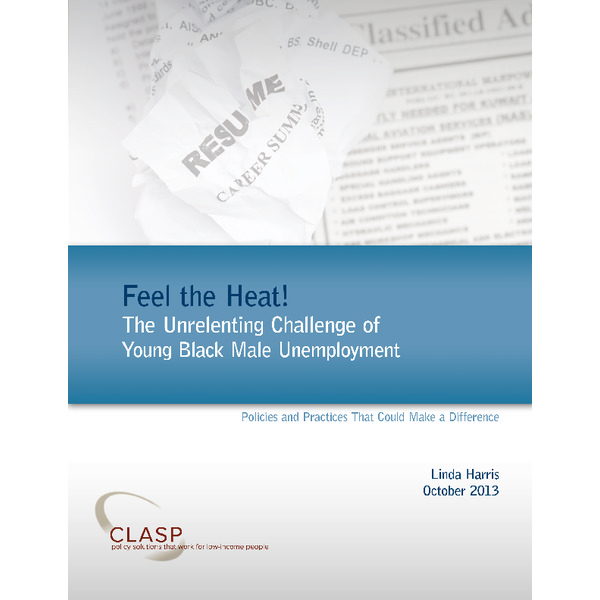 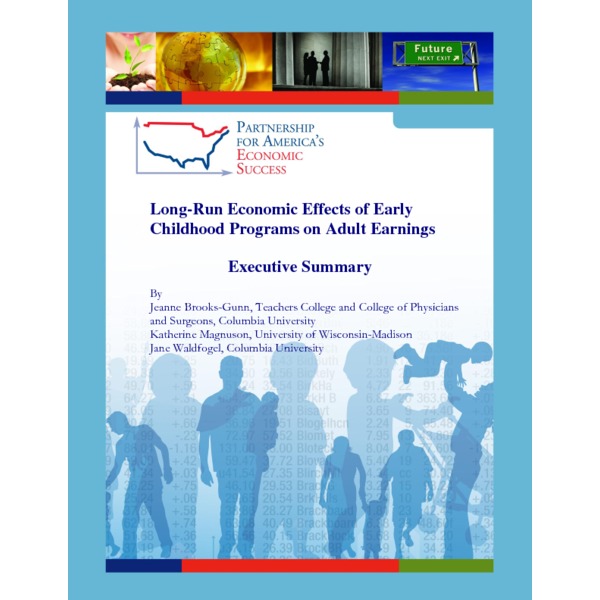 Our key substantive finding is that early improvements in child health, academic achievement, and behavior as well as improved parenting can yield sizable economic benefits for adult earnings. This is all the more striking when we recall that our estimates, for the most part, capture only a portion of the effects that early interventions are likely to have. Given data constraints for early achievement, attention, and the home environment we have focused on effects that work through improvements in school achievement in adolescence and that result in gains in one adult outcome, earnings. We have ignored effects that work through other intermediate outcomes, such as behavior and health, including peer effects, as well as effects on other adult outcomes, such as physical health. Moreover, our estimates do not take into account any synergies that might arise from concurrent improvements across more than one domain. If we could measure the full range of effects, the economic payoffs would surely be much larger than those estimated here. 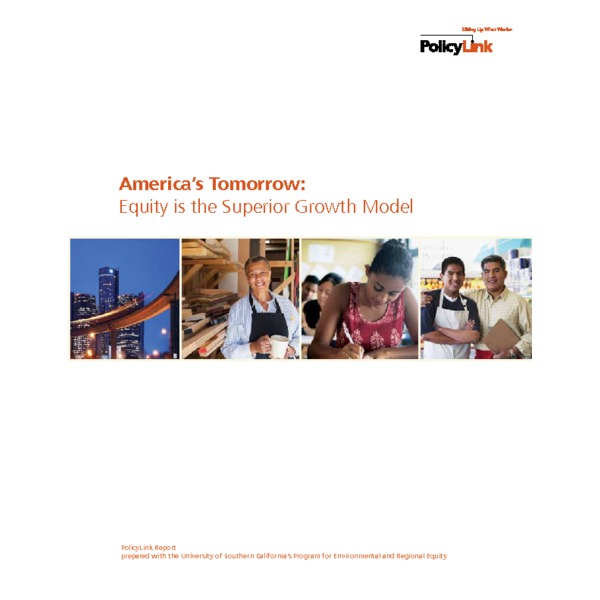 These are uncertain times. As the country barely inches its way out of the Great Recession, its economic future is unclear. The growth model of the past decade - based on a housing bubble, creditfueled consumption, and a deregulated financial industry - is failing nearly everyone. This model was not only unsustainable, but it also did not deliver on the American promise of shared prosperity. A few at the very top ran away with nearly all of the gains, and almost everyone else lost: Their wages stagnated, their assets evaporated, their jobs disappeared, and their safety net unraveled. The most vulnerable - low-income people and people of color - were hit first and worst. They are still waiting for a recovery that continues to sputter along and is at risk of "double-dipping" into another recession. At the same time, a major demographic transformation is well underway. The very same racial and ethnic groups who have long been left behind in America are quickly growing in number and population share. By the end of this decade, the majority of youth will be people of color. By 2030, the majority of workers under age 25 will be people of color. And by 2042, the majority overall will be people of color. To secure the future in the face of such economic and demographic upheaval, this nation needs a new growth model - one that builds on our assets, leaves the generations to come with a strong foundation for the future, and brings us closer to the ideal of American prosperity. Like California in the 1950s and '60s, under both Republican Governor Earl Warren and Democratic Governor Pat Brown, the nation's public- and private-sector leaders need to recognize that preparing the changing population for the needs of the modern economy is the key to our future; they must make investments that allow all people to maximize their potential. This new growth model must be driven by equity - just and fair inclusion into a society in which everyone can participate and prosper. Achieving equity requires erasing racial disparities in opportunities and outcomes. Equity is not only a matter of social justice or morality: It is an economic necessity.