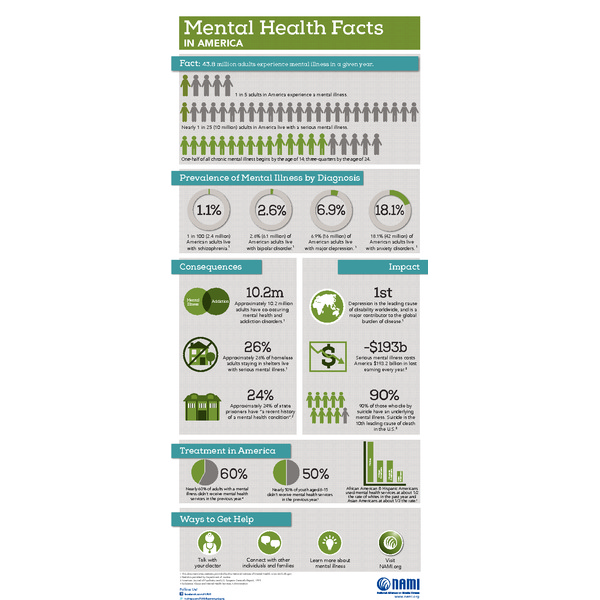 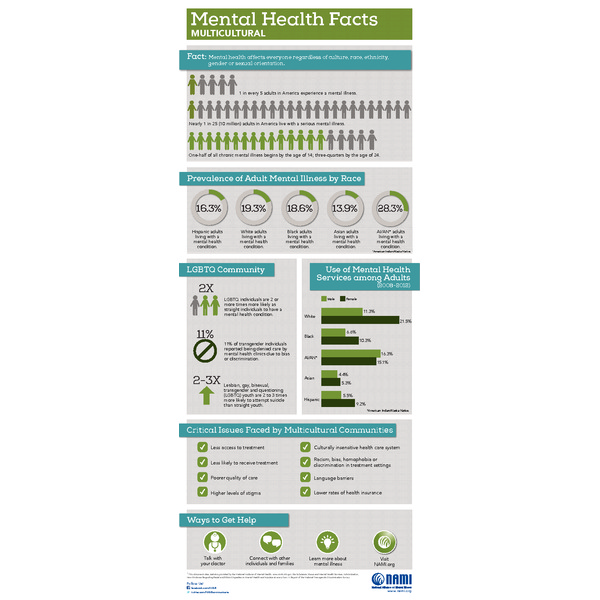 A fact sheet on mental illness based on demographics. 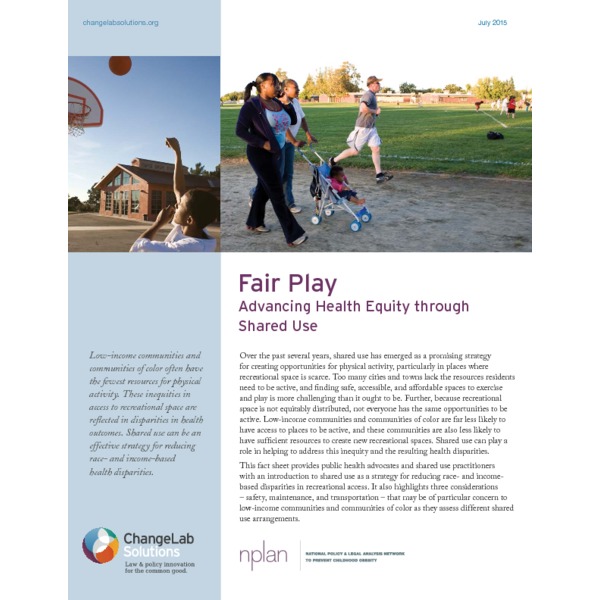 Over the past several years, shared use has emerged as a promising strategy for creating opportunities for physical activity, particularly in places where recreational space is scarce. Too many cities and towns lack the resources residents need to be active, and finding safe, accessible, and affordable spaces to exercise and play is more challenging than it ought to be. Further, because recreational space is not equitably distributed, not everyone has the same opportunities to be active. Low-income communities and communities of color are far less likely to have access to places to be active, and these communities are also less likely to have sufficient resources to create new recreational spaces. Shared use can play a role in helping to address this inequity and the resulting health disparities. 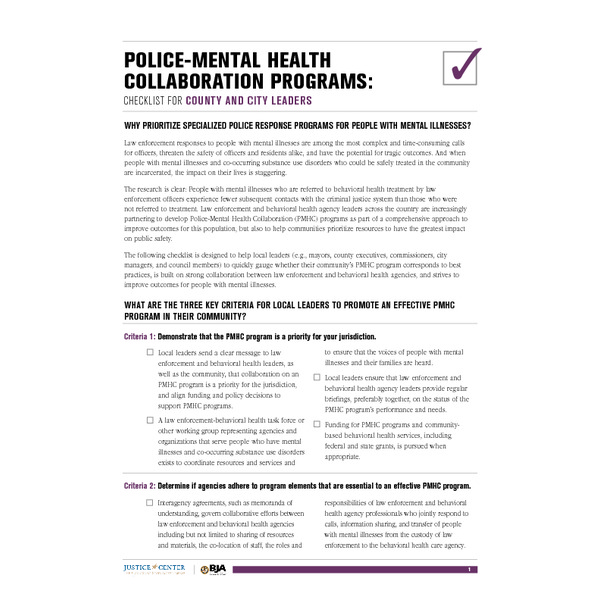 Law enforcement responses to people with mental illnesses are among the most complex and time-consuming calls for officers, threaten the safety of officers and residents alike, and have the potential for tragic outcomes. And when people with mental illnesses and co-occurring substance use disorders who could be safely treated in the community are incarcerated, the impact on their lives is staggering. The research is clear: People with mental illnesses who are referred to behavioral health treatment by law enforcement officers experience fewer subsequent contacts with the criminal justice system than those who were not referred to treatment. Law enforcement and behavioral health agency leaders across the country are increasingly partnering to develop Police-Mental Health Collaboration (PMHC) programs as part of a comprehensive approach to improve outcomes for this population, but also to help communities prioritize resources to have the greatest impact on public safety. 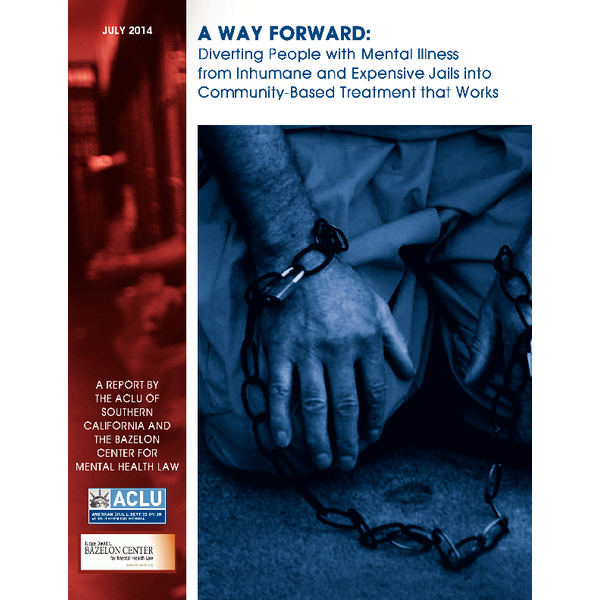 Jails have become warehouses for people with mental illness. Nationwide, nearly half a million inmates with mental illness are in local jails, and an estimated 10-25% have a serious mental illness, such as schizophrenia. In Los Angeles County alone, at least 3,200 inmates with a diagnosed severe mental illness crowd the jails on a typical day, which constitutes about 17% of the jail population. These numbers capture only the number of inmates with a diagnosed severe mental illness: the actual number may well be higher. Former Los Angeles County Sheriff Lee Baca has called L.A.'s jail system "the nation's largest mental hospital." The war on drugs and other law enforcement policies have resulted in mass incarceration of low-level drug and other non-violent offenders, many of whom are arrested for behaviors related to a mental illness. In L.A., roughly 1,100 inmates with mental illness are behind bars on an average night for charges or convictions for nonviolent offenses. And many of the behaviors that lead to such charges are rooted in mental illness. According to the Vera Institute of Justice, drug offenses make up the largest portion of charges for this inmate population, nearly 27%. "Mental illness frequently becomes de facto criminalized when those affected by it use illegal drugs, sometimes as a form of self-medication, or engage in behaviors that draw attention and police response." 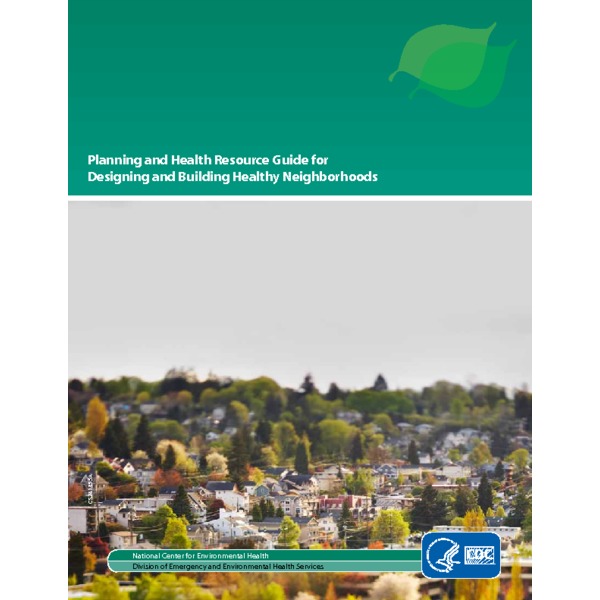 The way we design and build our neighborhoods can affect our physical and mental health. In this time of rising obesity rates, traffic congestion, long work hours, high stress levels, and fewer opportunities to be physical active, finding creative ways to address these issues is important. We must also consider the changing weather patterns and the possible impact on our way of life. All these factors stress the importance of designing and building healthy and vital communities that promote health.

Lincoln, Nebraska: Leveraging the Power of the Purse to Advance Health Equity 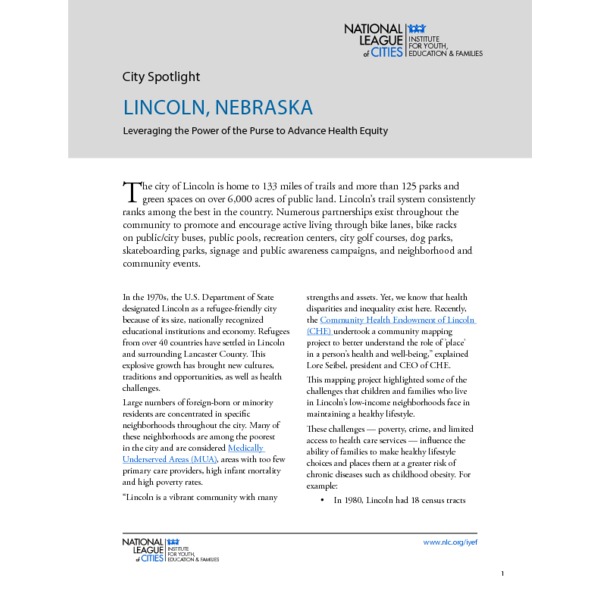 The city of Lincoln is home to 133 miles of trails and more than 125 parks and green spaces on over 6,000 acres of public land. Lincoln's trail system consistently ranks among the best in the country. Numerous partnerships exist throughout the community to promote and encourage active living through bike lanes, bike racks on public/city buses, public pools, recreation centers, city golf courses, dog parks, skateboarding parks, signage and public awareness campaigns, and neighborhood and community events.

Mental Health and the Role of the States 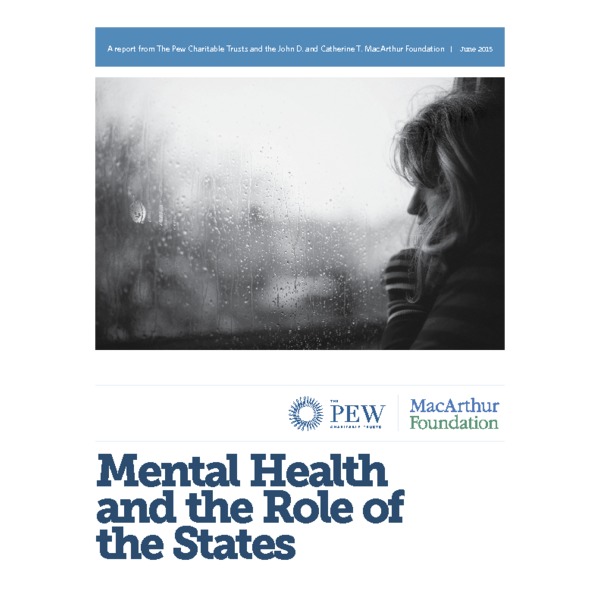 Millions of Americans have one or more forms of mental illness. These conditions have wide-ranging health, economic, and social consequences. For example, mental illness is a major factor in homelessness and incarceration. And serious mental illness - defined as a mental, behavioral, or emotional disorder that causes significant functional impairment that substantially interferes with or limits one or more major life activities - costs the country about $200 billion in lost earnings annually. 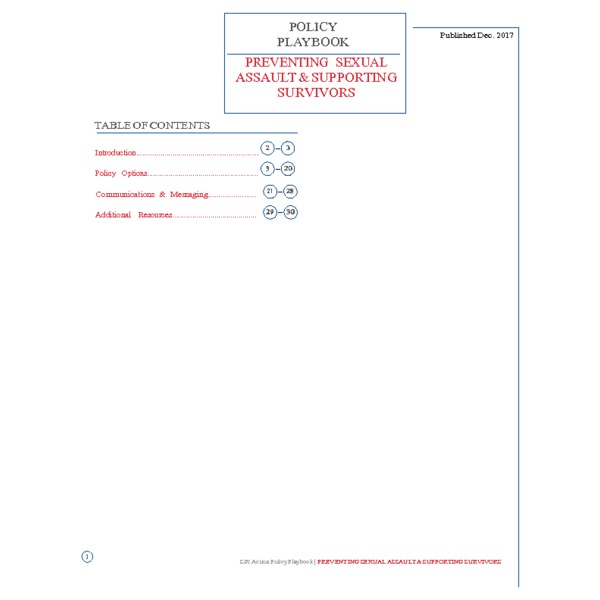 Sexual assault is an intensely personal, devastating crime with far-reaching impacts in our communities. It is common, destructive, and nobody should be traumatized by navigating their next steps for safety and healing. One in five women will experience sexual assault while in college, and one in three women have experienced rape, physical violence, or stalking in their lifetime. One in six men experience abusive sexual experiences before age 18, and transgender individuals also experience shockingly high rates of sexual assault. The social media campaign #MeToo demonstrated the deeply personal impact sexual harassment and sexual assault have on millions of Americans. States can act to fund prevention efforts, ensure that systems (medical, criminal justice, schools, campuses, etc.) support survivors, and protect the safety of all survivors. 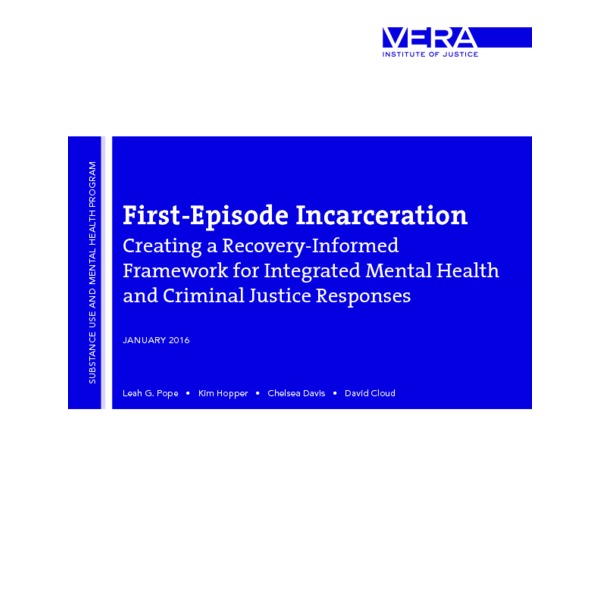